The Wheels of Justice 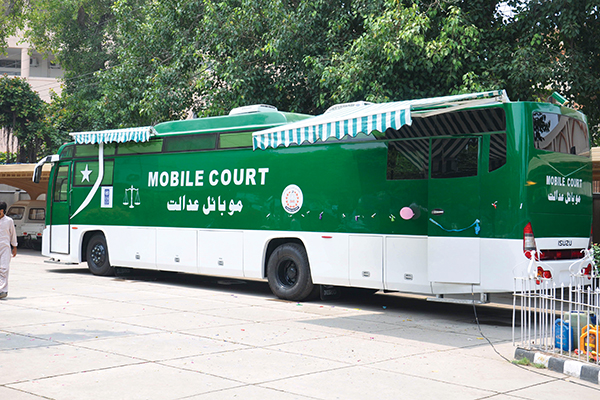 The first of at least seven planned courtrooms-on-wheels was rolled out on July 27 in Peshawar. Pakistan’s Mobile Court project is geared at delivering speedy justice—especially to Khyber-Pakhtunkhwa province’s rural poor. “We hope this will accelerate the administration of justice and deter crime,” said Marc-André Franche, UNDP’s Pakistan director, of the justice-at-your-doorstep RV. On its first day, the country’s first ever Mobile Court settled six cases. The Mobile Court was “completely financed” by the UNDP—which developed the project with the previous Awami National Party-led provincial government and the judiciary—and its running costs will be covered by the Peshawar High Court. “The High Court is planning to launch six more mobile courts in the next financial year,” Franche told Newsweek, adding that the Pakistan Tehreek-e-Insaf government has proposed to allocate Rs. 100 million in the current financial year to ramp up the project. Of course, security remains a concern. “The high court has appointed a high-level committee … to address security issues and identify safer locations. The central police office will play a key role and will take required security measures to minimize hazards,” said Franche. The pilot bus will remain in Peshawar until then. In a province where even regular buses are under terrorist threat, let’s hope the wheels of justice don’t crash to a halt.

NAB Harassing in the Name of Justice: Abbasi

what a wonderfull thought it is !!! it will surely give faster justice to poor people.