The World’s Most Sophisticated Science Machines 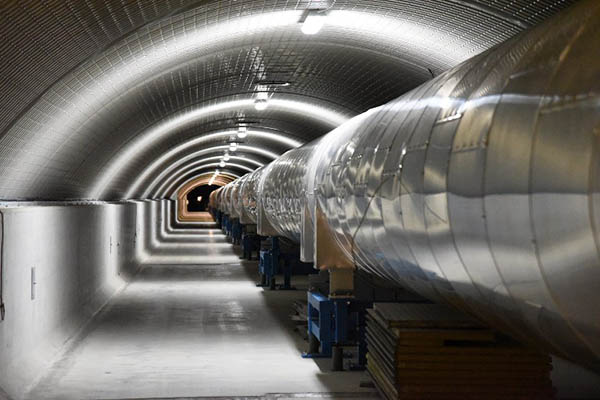 The LIGO detectors used to observe gravitation waves can sense some of the tiniest vibrations known to man.

The machines that gave scientists their first-ever glimpse at gravitational waves are the most advanced detectors ever built for sensing tiny vibrations in the universe. The two U.S.-based underground detectors are known as the Laser Interferometer Gravitational-wave Observatory, or LIGO for short.

One is located in Hanford, Washington; the other 3,000 kilometers away in Livingston, Louisiana. Construction began in 1999, and observations were taken from 2001 to 2007. Then they underwent a major upgrade to make them 10 times more powerful.

The advanced LIGO detectors became fully operational for the first time in September 2015.

In the case of this discovery, made on Sept. 14, 2015, the detector in Louisiana first picked up the signal of a gravitational wave, originating 1.3 billion years ago in the southern sky. Such waves are a measure of strain in space, an effect of the motion of large masses that stretches the fabric of space-time, which is a way of viewing space and time as a single, interweaved continuum.

The detector in Washington picked up the same signal 7.1 milliseconds later, allowing scientists to confirm the finding was real and not just a glitch.

The ultra-sophisticated tools work by using huge laser interferometers—each about four kilometers long—which are buried beneath the ground to allow the most precise measurements.

The L-shaped instruments track gravitational waves using the physics of laser light and space. They do not rely on light in the skies like a telescope does. Rather, they sense the vibrations in space, an advantage that allows them to uncover the properties of black holes.

“As a gravitational wave propagates through space it stretches space-time,” said David Shoemaker, leader of the Advanced LIGO project at the Massachusetts Institute of Technology. The detector, in short, “is just a big device for changing strain in space into an electrical signal.”

One way to imagine the curvature of space and time is to imagine a ball falling on a trampoline. The trampoline bows downward first, stretching the fabric vertically and shortening the sides. Then as the ball bounces upward again, the horizontal movement of the fabric expands again. The instrument acts like a transducer, changing that strain into changes in light—and then into an electronic signal so scientists can digitize it and analyze it.

The LIGO detectors contain two very long arms that contain optical instruments for bending light, and are positioned like the letter L. “The light from the laser has to travel in a vacuum so that it is not disturbed by all the air fluctuations,” said Shoemaker, noting that LIGO contains the “biggest high vacuum system in the world,”—measuring 1.2 meters by four kilometers long. If one arm shortens, and the other lengthens, scientists know they are seeing a gravitational wave.

On Sept. 14, “we saw just that signal, the shortening of one arm, the lengthening of the other arm, and then a millisecond later, the opposite effect,” said Shoemaker.

The LIGO teams at MIT and Caltech have worked in collaboration with a French-Italian partnership to build another advanced detector, known as VIRGO, which should come online later this year in Italy.