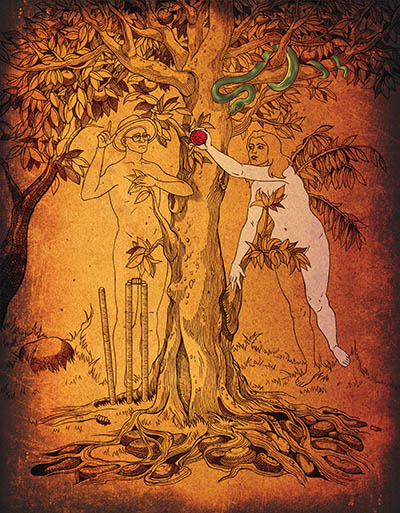 In the Islamic republic, it’s the ladies who are tearing up the pitch and storming the gentleman’s game.

Until a few years ago, Sana Gulzar had only one cow. “It was my childhood passion to own my own animals, and land,” says the 19-year-old from Khanewal in Pakistan’s cotton belt. “When I was younger, I used to see the milkman and dreamed of becoming one myself.” Gulzar became a professional cricketer instead, and is now the proud owner of three cows as well as parrots, pigeons, dogs, and rabbits. “Now I can sell the milk from my own cows if I want to!”

For Gulzar, playing cricket—which she took up to “get healthy”—is all about the simple joys and conveniences she can now afford. For most Pakistanis, the game means a lot more. Gulzar and her team made headline news last November when they won the gold medal at the 2010 Asian Games in Guangzhou, China. The victory, coming as it did on the heels of a gotcha exposé by British tabloid News of the World that laid low three of Pakistan’s men cricketers, was a refreshing, welcome surprise. So, too, was the homecoming for Gulzar and her teammates.

“The response was very surprising,” says Bushra Aitzaz, chairperson of the Pakistan Cricket Board’s Women’s Wing. “Pakistanis woke up to them late, but they’re as proud of their daughters as they are of their sons,” she says. President Asif Ali Zardari’s spokesman said the Guangzhou win was “a gift to the nation riding on a series of crises.” The president held a reception in their honor and awarded Rs. 500,000 to each player. Prime Minister Yousaf Raza Gilani and Punjab Chief Minister Shahbaz Sharif also feted the team. “People come up to me in the street and congratulate me,” says Gulzar. “People even congratulate my parents, they love having a daughter who is so famous and so successful.”

Everyone loves a winner. The recent celebrity of the cricket team and other women athletes, like squash player Maria Toor and runner Naseem Hameed, owes to their success at international fixtures. But the team that rehabilitated the Gentleman’s Game in Pakistan almost did not happen. For years, the PCB did not consider women’s cricket worthy of official patronage and support. Opposition also had to be overcome from conservative politicians, fundamentalists—and warring factions within the local women’s cricketing circle.

“We lobbied PCB’s Majid Khan to officially recognize women’s cricket,” says Aitzaz, referring to the now defunct Pakistan Women’s Cricket Association which she represented. “He said the PCB did not want to recognize the women’s team because they had their hands full with the men.” A year later, in 1997, Aitzaz discovered that the International Women’s Cricket Council had recognized one Pakistan Women’s Cricket Control Association, a private nonprofit, as the official national team who would play at the IWCC World Cup in India. Aitzaz and her colleague Shirin Javed went to Calcutta to lodge a protest, but got nowhere.

Founded by Shaiza Said Khan and her sister Sharmeen, the Pakistan Women’s Cricket Control Association became the second South Asian women’s cricket team to be recognized by international cricket associations. “I initially started in 1988, but we got some threats from fundamentalists here and shortly after that my sister and I left the country to study in England,” Khan, 42, told Newsweek Pakistan on phone from Karachi, where she works at her father’s carpet business that funded her cricket initiative. The IWCC accredited Khan’s league in 1996. “People here loved us, and people abroad welcomed us because we were the first Islamic country to play women’s cricket,” says Khan.

Not everyone at home was pleased about this. This included Nawaz Sharif, a cricket enthusiast and then prime minister, who tried to prevent Khan’s team from playing at the 1997 World Cup claiming that Islam did not permit women to play sports. Once again, the International Women’s Cricket Council sided with Khan and continued to regard her nonprofit as the official team.

During the military rule of Pervez Musharraf, a liberal who introduced affirmative-action initiatives for women, Khan’s cricket association took on the Pakistan Cricket Board itself. When the PCB announced it would hold national tryouts for a women’s team, Khan went to court and, in April 2003, got a restraining order barring the PCB from forming a separate women’s team. The following July, the PCB announced it was pulling its women’s team out of the IWCC tournament in Amsterdam. This was surprising given that the team had not been invited. “Please ensure [that] if the authorized Pakistan Women Cricket Team does not participate then no other team should be allowed to use the name of Pakistan and its emblem,” the PCB said in a letter to the International Women’s Cricket Council.

Khan’s innings ended unexpectedly in 2005 when the IWCC merged with the International Cricket Council, the highest global governing body for the sport. The ICC ruled that only teams recognized by the official boards of member countries would be allowed to play international cricket. As an accredited member of the IWCC, Khan’s league voted for the merger after receiving, she says, written assurances from then PCB chairman Shaharyar Khan. “He approached us at that point, buttered us up, issued a letter recognizing us as the official team, and asked us to vote for the merger,” she says. “After the vote, he retracted the letter and hijacked our team.” (At press time, the former PCB chairman could not be reached for comment.)

She says her interaction with the PCB and the current team is “nonexistent, but not completely by my choice.” Khan maintains that the national team is an unofficial one since her PWCCA is still accredited with the IWCC and ICC, and the matter is pending in court. “Legally speaking, the PCB cannot even have a women’s wing since they do not have any enabling clauses in their Constitution to support it.” The PCB disagrees. Aitzaz became the third PCB Women’s Wing chairperson last September and accompanied the team to Guangzhou. She credits her predecessor, Javed, who passed away in March, for making women’s cricket happen in Pakistan. “None of this would have been possible without her hard work,” says Aitzaz, “she put this team together.” Khan claims otherwise: “Nine of them are my girls.”

For the players, working with the PCB has meant better training facilities, and better pay. “Our cricket has improved immensely and we are constantly being trained and groomed as a team,” says Sania Iqbal, the 26-year-old all-rounder from Multan. “And the international exposure we’re getting is also helping us gain experience.” The women also get to hone their game by playing against the Under-25 men’s team. Star men players also pitch in. Spinner Saeed Ajmal recently coached the girls at a camp in Faisalabad. “The men’s team has been very helpful,” says Ayesha Asher, manager for the women’s team. “Whenever they are available, they show up to conduct coaching classes,” she says.

PCB patronage is also reassuring to the families of the players. “The girls are performing well because all of them have been offered central contracts by the PCB,” says team coach Mansoor Rana. “Their parents know that all this hard work is backed by a solid financial structure,” he says. With a budget of Rs. 2.6 billion or about $30 million through its own revenues for the current financial year, the Pakistan Cricket Board is among those rare few state-run organizations still in the black. But this does not mean women cricketers have a level playing field just as yet. According to a PCB official who did not wish to be named discussing pay structures, the board offers three types of contracts to women players, who make between Rs. 25,000 to Rs. 50,000 per month. Contracts for the men start in the six figures. But additional income for women is starting to trickle in through endorsements, and they can also earn foreign exchange playing county cricket in England or Australia, says the official.

More wins mean more money. The team has already started gearing up for the 2013 Women’s World Cup being hosted in India. “We’re ranked No. 8 in the game today, but by the time we play the World Cup, we will be ones to watch out for,” says manager Asher. Eighty-nine of the ICC’s 105 members have some form of women’s cricket, but only 10—including Pakistan—have One Day, Test and T20 status. Pakistan hosted the second Women’s Asia Cup in December 2005. In 2007, the ICC Women’s World Cup Qualifiers were shifted from Pakistan to South Africa because of political instability.

Terrorism has also affected Pakistan’s favorite sport. But here, again, the ladies are making a difference. Last month, Nepal’s women cricketers became the first international squad to play in Pakistan since the March 2009 attack in Lahore on the Sri Lankan men’s team. “The ICC should look at the fact that we hosted Nepal, who really enjoyed their tour,” says Asher. “If girls can play international matches here, why can’t the men? The ICC should look at this and start bringing cricket back to Pakistan.” The matches with Nepal played in front of thin crowds last month at the Lahore Country & Sports Club in Muridke, where the headquarters of Jamat-ud-Dawaah, a U.N.-designated terrorist organization, are situated.

The team heads to Sri Lanka this month and will play the World Cup Qualifiers in November. Some sports commentators believe Pakistan is not ready to face India (whose men’s team won the 2011 ICC World Cup on April 2), and would not have won at Guangzhou had India participated. “To be perfectly frank, I don’t think their gold medal is any kind of major achievement,” says PWCCA’s Khan. “India and Sri Lanka were not there, all we managed to do was defeat Bangladesh— that really isn’t anything great.” Captain Sana Mir, 25, dismisses such observations. “Look, I don’t believe in ifs and buts,” she told Newsweek Pakistan. “We won and have this medal for four years, I want to enjoy that and not deal with detractors.”

For many of these women, having come this far is reward enough. “When I was growing up, my father would carry me on his shoulders to the fields where the boys played cricket,” says Khanewal’s Gulzar, who was the highest wicket taker at the Asian Games. Playing cricket for Pakistan has meant that her father no longer has to work as a gardener at less than minimum wage. “Someday, I may start my own livestock trading business,” says Gulzar, who is also a first-year college student. “I never imagined that a childhood game could prove this profitable and get me this much fame. It has been such a blessing.”

With Jahanzeb Aslam and Qasim Nauman