Home Lightbox There Goes the Neighborhood

There Goes the Neighborhood 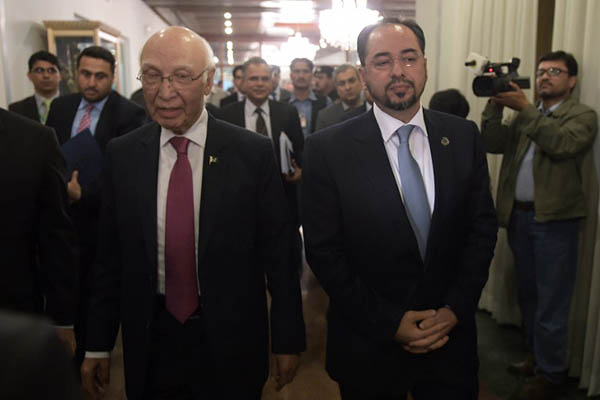 Islamabad must engage all its neighbors to normalize bilateral ties.

In the west, Afghanistan has once again expressed its dissatisfaction with Pakistan at a time when we are trying, through Operation Zarb-e-Azb, to stabilize our country and, as a consequence, the region. Afghan President Ashraf Ghani chose this week to repeat his plaint that there is an “undeclared war” unleashed by Pakistan on his country. He used hurtful words (“double game”) to claim that we are insincere in our pledge of good neighborliness.

In the east, the capture in Balochistan of terror-planning Indian spy Kulbhushan Yadav has brought more heat. Indian news channels are accusing Pakistan of concocting false evidence. Pakistani news channels are accusing India of sponsoring terrorism. The war through media further restricts space for both governments to “normalize” relations: the heavy jingoism makes any kind of rational dialogue impossible. Pakistan and India now both have their “dossiers” against each other.

Pakistan needs to engage all its neighbors in a process of normalization rather than score brownie points. Peace gestures must be exchanged with Bangladesh after both sides have thrown out their diplomats amid unseemly accusations aired on the media. Pakistan must also handle its post-Yadav equation with Iran carefully. It is unfortunate that Iranian President Hassan Rouhani’s visit to Islamabad was marred by news that Yadav entered Balochistan from Iran, where he was posing as a businessman in Chabahar. Pakistan has since asked Tehran to help capture Yadav’s fellow agents in Iran. The media in Tehran has not been too friendly since.

Given its internal scene of relentless terrorism, Pakistan must tread carefully. It must resist putting all the blame for this mayhem on its neighbors. The latest news that the “pledged” tours of the Afghan men’s cricket team and the Kenyan women’s cricket team to Pakistan have been cancelled because of the “precarious security situation” reminds us that our internal housecleaning is past overdue. The arrest of agent Yadav is certainly an ace for Pakistan, provided it is used adeptly for normalization of regional relations.

There will be rough patches but afghanistan has to understand pakistan is doing its best to help them stabilize, india on the the otherhand is sponcoring state terrorism via both iran and afghanistan which is the actual bone of contention between islamabad tehran and kabul