Home Latest News ‘There is No Eid’

‘There is No Eid’ 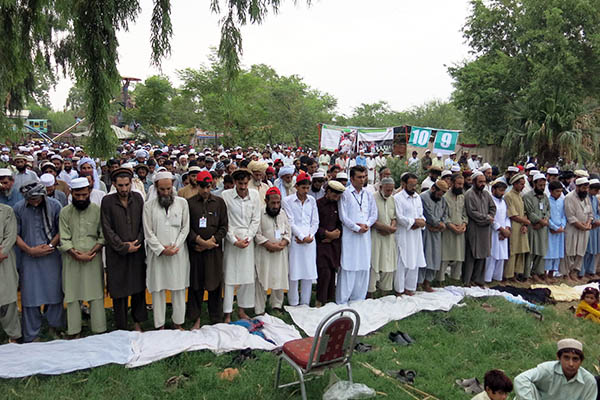 As the rest of Pakistan celebrates the Muslim festival, displaced tribesmen wait for the day they can return to their homes.

The Muslim festival of Eid-ul-Fitr, marking the end of the fasting month of Ramzan, is usually a time of joy for the entire family. In Pakistan, the day begins with the obligatory Eid prayers, followed by visits to family and exchange of food and gifts. For the internally displaced persons of North Waziristan, however, there is little to celebrate this year. Forced to live in cramped rented houses, government schools and with relatives, the displaced tribesmen are mourning the lives they were forced to abandon—and the people left behind.

Nearly 1 million people have fled North Waziristan, according to the FATA Disaster Management Authority. One such Pakistani is 62-year-old Nurghamjana. The internally displaced woman fled Mir Ali and is currently living at a government school in Karak. “I wept the whole day,” she told Newsweek of her first Eid away from home. “It’s too hard to celebrate Eid while living life as an elderly IDP,” she said, adding, “I miss my homeland.” Most former residents of North Waziristan echo the sentiment.

“It doesn’t feel like a regular Eid,” said Abdur Rauf, a 33-year-old father of two from Miranshah. The government servant is also staying in a school in Karak and said Eid was not a joyous occasion for him as it had been overshadowed by relatives who were still stuck in North Waziristan as the military operation rages. “My wife and brother are still there and I have no idea if they are still alive,” he said. “It is just an ordinary day and we offered Eid prayers because it is an obligation.”

Nughamjana grudgingly concedes that their living conditions have actually improved in recent weeks, but says she doesn’t feel content away from her ancestral lands. “We lived in a mud house [in Mir Ali] and are currently living in a cement building with electricity and running water,” she said. “[But] this land has no meaning to us.” The 62-year-old said she couldn’t even get excited about new clothes this year. “I didn’t wear any new clothes because I feel like a nomad,” said Nughamjana. “We used to cook sweets and visit our relatives to relax after fasting throughout the month of Ramzan, but [in Karak] we are confined to this school,” she added. “We have everything we need, but we also have nothing,” she said.

Rauf said that he was too depressed to celebrate Eid. “We [IDPs] are taking antidepressants. There is no joy,” he said. “At home, we would be preparing new clothes and shoes. The entire family waits for this day and plans it out well in advance.” But this year, he said, he was cut off and had been left alone. “How can someone celebrate Eid in this panic-stricken situation?”

Even the children have been left bereft. In usual circumstances, parents give their children Eidi (cash) or gifts to celebrate the end of Ramzan. This year, there is little to go around. “It was a sad day being away from home,” said 14-year-old Abdul Qadir. He said he and his friends would usually leave their houses in the afternoon and play cricket or football. “We are confined to this school [with everyone else] this year.”

For Rauf, it feels like his own country has abandoned him. “I don’t feel like I’m in Pakistan,” he said. “I feel like I’m living in exile.”

A flabbergasting comment ‘taking antidepressants’. Is this a comment by the writer or an actual person? People from such areas of strong history ad character don’t know what an antidepressant is. This is a city disease. Please write intelligently even if you are lying.

This is not a new news.Western press since long has been treading this path of anti – Pakistan ism. See the craftiness of the story the reporter is weaving.