Home Scope ‘There Is No Money’

‘There Is No Money’ 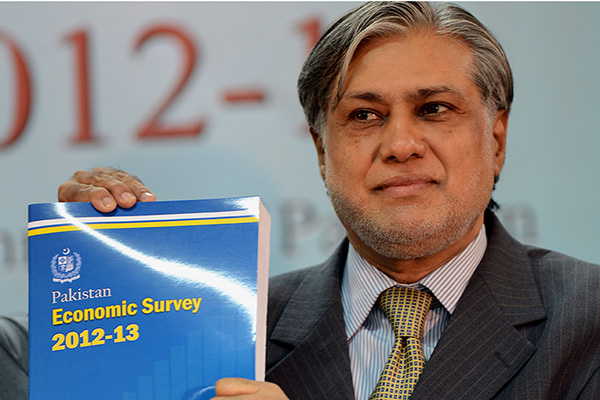 Pakistan’s cash-strapped government has set a target of 4.4 percent economic growth for the coming fiscal year, finance minister Ishaq Dar said Tuesday, while promising new measures to tackle crippling power cuts. “We have set the target for GDP growth rate at 4.4 percent,” Dar told a press conference on the eve of a federal budget presentation in the new Parliament.

The new government of Prime Minister Nawaz Sharif’s Pakistan Muslim League (Nawaz) faces a daunting array of problems ranging from an energy sector crippled by $5 billion of debt to dwindling foreign exchange reserves, all the while facing down a Taliban insurgency.

Dar said that the GDP growth rate in the current fiscal year ending on June 30 remained at 3.6 against a target of 4 percent. He said that his government would curtail the fiscal deficit, which had run to 4.7 percent, through “strict financial discipline.” Dar also promised to solve the disrupted payment cycle, which has crippled the energy sector with daily power outages from 16 to 18 hours. “We want to do it in minimum possible period and just finishing off this debt will not solve the problem unless we reduce our line losses or thefts which were more than 30 percent.”

The government had set a target of eight percent for inflation in the next financial year, he added. “We are a business-friendly government, but we will not allow industry to make undue profits as it burdens the poor,” he said, promising a “corruption-free” government to provide a conducive economic environment.

Dar said that he had no option but to get fresh loan to pay old ones. “There is no money to make heavy debt repayments by December and I think that in this situation, there is no harm in taking more loan to repay old debt,” Dar said.

Pakistan has suffered several years of weak economic growth and its currency has slid in value while foreign exchange reserves have dwindled. The country is still paying off an $11.3 billion International Monetary Fund loan from 2008. Analysts have said it will need to go back to the lender for more to stave off a balance-of-payments crisis.

Why are we paying back $4 billion in interest payment when we don’t have the money. We should declare a moratarium on debt interest payment for five years and use that money along with fiscal discipline to rectify whats gone wrong. Why take more loans. it all has to be paid back someday with heavy interest. if we do this we will be in a good position to start paying back what we have borrowed without crippling ourselves. More loans mean more kickbacks!!