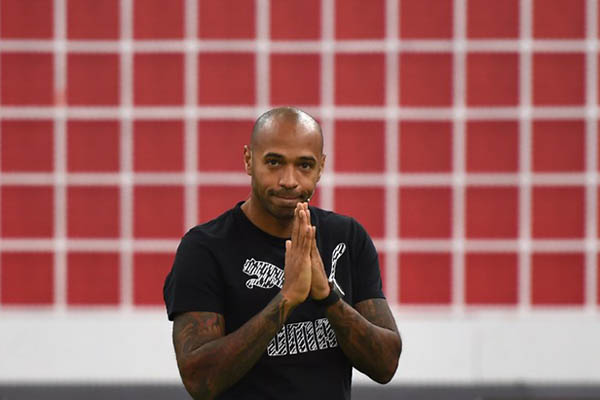 British club’s all-time top scorer, currently a member of Belgium’s coaching staff, says anyone would be intrigued by the job

Arsenal’s all-time top scorer Thierry Henry said it would be a “dream” to manage the club, whose season is threatening to unravel after their capitulation to Manchester City in the League Cup final.

Arsene Wenger’s side crumbled 3-0 at Wembley on Sunday and languish 10 points off the top four in the Premier League, with the Europa League their only chance of silverware this season.

Wenger is under contract at Arsenal until 2019 but a failure to qualify for the Champions League for a second straight year would ramp up pressure for him to step down.

Asked on-air after the game about whether replacing Wenger would appeal to him, the Sky Sports pundit, who is also a member of Belgium’s coaching staff, said: “I still have a job to do with Belgium, but let’s see what’s going to happen. It will be a dream for me, but I’m still with Belgium. Interested? Yes, who wouldn’t be? But I can’t talk about that out of respect for the man that is in charge still and my job that I’m doing right now with Belgium. But who wouldn’t be interested?”

Henry, who was brought to Arsenal by Wenger in 1999, believes a lack of consistency is the key to the club’s troubles, with the Gunners having lost six games in all competitions since the turn of the year. “With Arsene, what is difficult is when you have bad momentum,” the 40-year-old told Sky Sports News on Monday. “The consistency is not always there and you need to be consistent. You need to also sometimes have some good games away from home. The feeling with the fans is that you cannot brag about the win because next week we might be in trouble. What’s difficult when you start to lose is getting that energy and commitment back. When you don’t win the league for a long time—14 years running—that doesn’t help.”