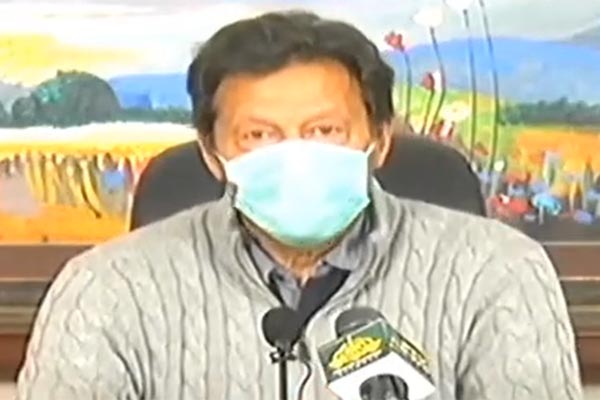 Prime Minister Imran Khan on Sunday urged citizens of Pakistan to avoid public gatherings and adopt measures to curb the spread of the novel coronavirus, warning that the ongoing third wave of the pandemic may prove deadlier than the first two.

“The third wave is proving far more intense than the first two,” he said in a nationally televised address. “I urge you all to be extremely careful [to protect yourself and others],” he added.

The prime minister reiterated calls for mask compliance. “It has been proven across the world that wearing a mask dramatically reduces the chances of you contracting coronavirus,” he said, stressing that while it would be preferable to go for a national lockdown, the country did not have the resources to support such measures and ensure people would not starve or suffer needlessly.

“Even countries far better off than Pakistan do not have the resources to do such a thing,” he explained and once again said that wearing masks was the best way to avoid the pandemic from overloading the country’s healthcare infrastructure.

“Try your utmost [to wear masks in public] and tell others to do it as well. I fear the ongoing third peak could prove much worse than the first two peaks,” he said, warning that there was “no telling where it was headed” at its current trajectory. “Our hospitals are filling up fast. The variant that originated in the U.K. was brought by people traveling into Lahore, Islamabad, and Peshawar, where we are witnessing the fastest rise in cases,” he said and urged the public to realize the gravity of the situation.

Recalling how effectively Pakistan had overcome the first wave of the pandemic last summer, the prime minister acknowledged that after a year, the public had become complacent. “I know it has been a year and people are less worried, but I will say this again: God forbid, if the virus continues to spread at its current rate, all our hospitals will fill up entirely,” he said.

Referring to the country’s vaccination program, which has struggled to inoculate roughly 800,000 people in the past two months amid limited supplies, Khan warned there was currently a global shortage of the lifesaving drugs and the supplies promised to Pakistan—by the charitable GAVI regime—had been delayed because the countries manufacturing them needed to cater to their own populations first.

“It is of paramount importance we follow SOPs. Do not go to gatherings such as weddings, avoid restaurants, as these places are considered super-spreaders,” he said, reiterating that individual actions were necessary, as the government could not shut down factories and businesses.

The prime minister, currently recovering from COVID-19 himself, admitted that his own infection was a result of complacency. “I exercised caution for a whole year. I never went to any wedding or even to a restaurant to eat. I practiced social distancing and kept my mask on for the most part,” he claimed, adding that this had helped him stay safe in the first two waves of the pandemic.

“However, I did not exercise as much caution in the Senate elections and caught the virus,” he said of testing positive for COVID-19 on March 20.

“God has been merciful to me and my wife, but let me tell you, this is a disease that if it gets into your lungs, it is highly dangerous. So I plead to you, please, be careful,” he added.

According to Special Assistant to the P.M. on Health Dr. Faisal Sultan, the premier’s recovery is progressing steadily. In a posting on Twitter earlier on Sunday, he said that Khan had been advised to slowly return to his normal work routine in the coming week.