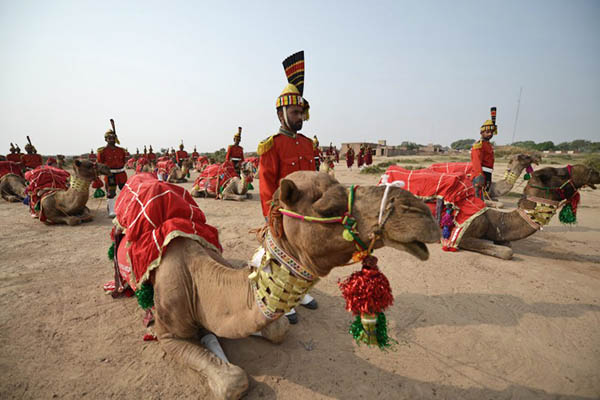 A haunting peal reminiscent of the Scottish Highlands reverberates across Pakistan’s inhospitable Cholistan desert as the nation’s first camel-mounted military bagpipe band marches, noses in the air. With scarlet and gold uniforms in sharp contrast to the dichromatic landscape of beige and green, the camels’ tails switch in perfect rhythm.

Their passengers sway above them with looks of nervous concentration as they try to keep balance while blaring out the notes. “It is very difficult to play the bagpipe while sitting on the camel,” admits piper Muhammad Hussain. “But we have now learned the art.”

The band, part of the Pakistan Desert Rangers, was formed last year after hundreds of animals went out of service, reduced by the latest military patrol vehicles to doing mere donkey’s work—that is until the idea to dress them in bunting and put bagpipers on their backs was born.

After making their debut before startled spectators at Pakistan’s National Day parade in Islamabad in March, they are now deployed in Moj Garh, 100 kilometers east of Bahawalpur in Punjab province, where they drill daily in preparation for a potential international career.

Wing commander Lieutenant Colonel Abdul Razzaq says the band is a matter of pride for his troops, particularly as a counter-balance to rival India. The neighboring nation, he admits, does have its own camel-mounted military band—but theirs, he notes pointedly, “is a brass band,” with not a bagpipe in sight.

The Pakistani version helps keep them on “equal footing” with “our enemy,” he adds as the camels march past to the beat of the drums. “They [the troops] should not feel demoralized… They should feel pride that we also have such a band. We are not less than anyone else.”

Moj Garh, home to a centuries-old fort, serves as a base for troops in the Pakistan Army, and its desert location made it a prime choice for officials deciding where to locate their camel band camp. The Army has built a huge farm housing some 170 camels there, where handlers train the temperamental animals to toe the line.

“It is an uphill task to train the camels, who are known for their anger, vengeance and mood-swings,” Razzaq says, as nearby handlers drape their charges in costumes before the start of a performance. A team of veterinary doctors and medics give round-the-clock care and the handlers provide prompt feedings.

“They get angry and start fighting with each other if we do not feed them on time,” Sepoy Asghar Ali, one of the handlers, tells AFP, admitting that while camels are “quite intelligent” they are also quick to fury. He describes the relationship as “friendly,” but it hasn’t been an easy road. “We have trained them in such a way that they don’t get upset with even drum sounds… they obey our orders now.”

It’s not all marching. Some of the specially trained camels also perform in an acrobatics display, featuring Rangers perched upside down on their backs and pyramids of riders balancing across three camels at a time—a maneuver described, somewhat understatedly, by Razzaq as one of the “most difficult” to perform.

The uniforms—from elaborate neck and leg bands for the camels to the bagpipers’ tartan—are hand-stitched in Sialkot. “I feel pride in wearing this uniform and playing the bagpipe while sitting on the camel,” the bagpiper Hussain tells AFP near the Moj Garh fort.

Band major and Sub-Inspector Muhammad Iqbal, whose task it was to train the band, says it was difficult getting them over the hump. “But I did it,” he says proudly, adding that the camels are now “good friends.”

“They are more loyal than humans.”

Since their March debut the band has performed just once, in Lahore. But they are now poised for bigger things, says Razzaq, who hopes to secure specialized training for his team at Pakistan’s prestigious Army School of Music.

There is at least one other known camel-mounted military bagpipe band: the Sultan of Oman’s Royal Cavalry Band. But Pakistan’s pipers may soon rival them on the world stage. “We can perform anywhere in Pakistan even at a very short notice,” Razzaq says. “We are even ready to perform outside Pakistan—if facilities are provided to us to transport the camels.”

THEY ARE DOING THIER DUTY WITH PERFECTION,NOT FOR FAME