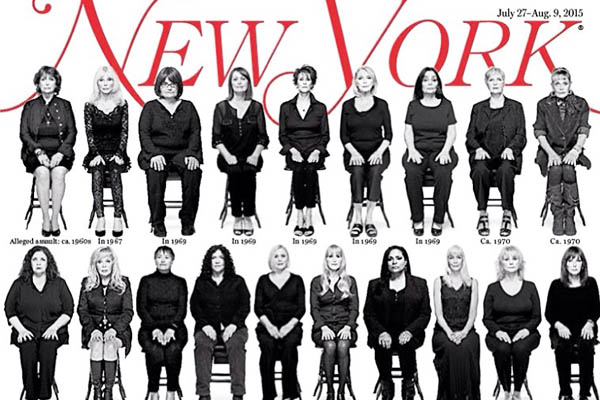 A ‘New York’ magazine story profiles the women, whose stories are startlingly similar and span decades.

Thirty-five women who allege they were sexually assaulted by U.S. comedian Bill Cosby were united Monday on a magazine cover to tell startlingly similar stories of abuse. They include models, waitresses, Playboy bunnies and women who used to work in show business. One says he raped her while she was grief stricken over the recent death of her six-year-old son.

Cosby, a pioneering African-American comedian who played a beloved family doctor on the hit 1980s sitcom The Cosby Show, has become a pariah in the wake of the snowballing scandal.

The New York magazine cover story is the largest expose yet of alleged abuse from nearly 50 women who have publicly accused Cosby of assault from the 1960s to 1996 across the United States. Despite being interviewed separately, many of their stories are startlingly similar: that the famed comedian drugged them, then assaulted or raped them while they were barely conscious.

“Each story is awful in its own right. But the horror is multiplied by the sheer volume of seeing them together,” the magazine wrote.

New York photographed and interviewed each woman separately in a project that was six months in the making before the stories were uploaded on the web edition late Sunday. In all 46 women have publicly accused the 78-year-old of rape or sexual assault.

Many of the 35 in this week’s magazine story say they know of others still out there who have chosen to remain silent.

Victoria Valentino, a 72-year-old former Playboy bunny, was allegedly assaulted in 1969 when Cosby took her and a friend to a steak restaurant not long after her young son had died. She told the magazine that Cosby gave her and her friend pills that would make her “feel better” but instead left her fighting nausea and her friend “completely unconscious.”

Valentino remembers Cosby sitting next to her friend on a love seat “with this very predatory look on his face.”

“He had me give him oral sex, and then he stood me up, turned me over, did me doggy style and walked out. Just as he got to the door, I said, ‘How do we get out of here, how do we get home?’

Joyce Emmons, 70, who managed a comedy club, said she was assaulted in around 1979 after a night out with the star and friends, during which she had asked Cosby for a headache pill. Instead of a Tylenol, Cosby said he had something stronger.

“All I remember is taking the pill,” she told the magazine. When she woke up, she “had no clothes on, and there was Bill’s friend totally naked in bed with me.”

She said Cosby told her he had given her a Quaalude. Emmons said she had been devastated by the behavior of someone she had considered a close friend. “I was hurt with Bill more than angry at his friend. Bill let him take advantage of me. That kills me. That’s why I know the stories of what he did to the other women are true.”

In a lurid 2005 court deposition, Cosby admitted obtaining Quaaludes to have sex with at least one woman, obtaining seven prescriptions for the sedative and giving them to other people.

Last week, Cosby’s lawyer Monique Pressley defended the actor, who has remained almost entirely tight-lipped about the allegations, even as his reputation has been shredded. “The sheer volume, or number of people who are saying a particular thing does not make it true,” she told ABC television.