Home Latest News ‘This is Not a Military Coup’

‘This is Not a Military Coup’ 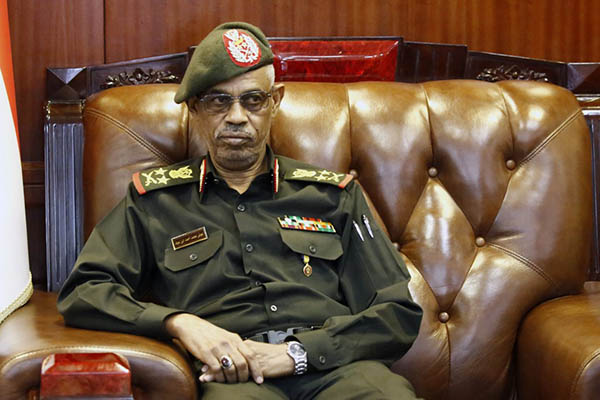 Sudan’s new military leader resigned on Friday just a day after being sworn in, as the country’s army rulers insisted they would pave the way for a civilian government.

The head of Sudan’s new ruling military council, General Awad Ibn Ouf, announced his departure after being sworn in late Thursday following the ouster of long-time president Omar al-Bashir. His move came shortly after the council’s political chief Lieutenant General Omar Zain al-Abdin told Arab and African diplomats at a meeting broadcast on state television: “This is not a military coup, but taking the side of the people.”

Ouf’s departure was an apparent sign of confusion among the northeast African country’s new leaders after Thursday’s ousting of iron-fisted Bashir. But there was jubilation at the news on the streets of Khartoum.

Tens of thousands of protesters had kept up a vigil at the army headquarters in the Sudanese capital Friday angrily demanding that the military make way for a civilian government. “I hereby announce my resignation as head of the Transitional Military Council,” Ibn Ouf said in an address to the nation, announcing he had chosen General Abdel Fattah al-Burhan Abdulrahman to replace him. He said he trusted in Abdulrahman’s “experience and suitability I trust to bring this ship to a safe shore.”

The Sudanese Professionals Association, which has spearheaded the nationwide protest campaign, hailed Ibn Ouf’s departure as “a victory of the people’s will.”

The umbrella group organizing the protests called on newly sworn-in ruler Burhan to “transfer the powers of the military council to a transitional civilian government.”

“If this does not happen we will continue with our sit-in in front of the army headquarters and other towns,” it said in a statement.

The demonstrations against Bashir’s 30-year rule first erupted in December, triggered by a tripling of the bread prices in one of the world’s most impoverished countries. But vast crowds have been thronging outside the army headquarters since Saturday in unprecedented scenes.

Sudan’s police said on Friday that 16 people were killed and another 20 wounded by “live ammunition” in Khartoum during protests over the past two days.

After denying charges of a military coup, Abdin said the transitional military council, due to stay in power for two years, would “open dialogue with political parties.” There “will be a civilian government and we will not intervene in its composition,” he vowed.

He also appealed to foreign diplomats for “your donations, as we have some economic issues,” alluding to fuel and food shortages. “The role of the military council is to protect the security and stability of the country,” Abdin added.

Thousands of men and women, dressed in white, again braved the searing Sudanese heat on Friday to offer prayers outside the sprawling army complex, which has become a focus point of the protests since Saturday.

The imam leading the prayers was draped in the Sudanese flag. Hussein Mohamed, an elderly man from Omdurman, said he was attending the protest for the first time in response to a call to hold Friday prayers there.

“It is too, too hot but I’m impressed by what our young men and women are doing here,” he said. “I’ll surely come again.”

Bashir, who took charge in a 1989 military coup, remained in custody on Friday, but Abdin said the council would never extradite him or any other Sudanese citizen. The International Criminal Court (ICC) has issued two arrest warrants against Bashir for suspected genocide and war crimes.

The military council had announced a two-year transition period, but Sudan’s U.N. envoy told the Security Council in New York that this could be shortened “depending on developments on the ground and agreements between stakeholders.”

Protesters have defied repeated deadly attempts by riot police and the feared intelligence services to crush their movement. But when Bashir’s overthrow was finally announced on Thursday in an address to the nation by Ibn Ouf, it was met not with joy but anger.

Protest leaders dismissed the transitional military council as the “same old faces” from a regime, which led the country into multiple conflicts, worsening poverty and ever-widening social inequality.

Thursday’s announcement meant “we have not achieved anything,” said one protester, who gave his name only as Adel. “We will not stop our revolution. We are calling for the regime to step down, not only Bashir.”

Analysts said Bashir’s overthrow in a “palace coup” made the transition to democracy in Sudan a more distant prospect. “The power struggle within the security cabal that took power yesterday is just beginning,” said Alex de Waal, a Sudan specialist at Tufts University. “Bashir had kept their rivalries and ambitions in check; his removal brings in its wake an unregulated uncertainty.”

Multiple world powers have made calls for a peaceful transition. Washington urged the military council “to exercise restraint and to allow space for civilian participation within the government.”

The European Union urged the army to carry out a “swift” handover to civilian rule. Britain’s Foreign Secretary Jeremy Hunt has said that a two-year transition overseen by the military “is not the answer.”

“We need to see a swift move to an inclusive, representative, civilian leadership,” Hunt said.