Home Lightbox This War Is Not About to End

This War Is Not About to End 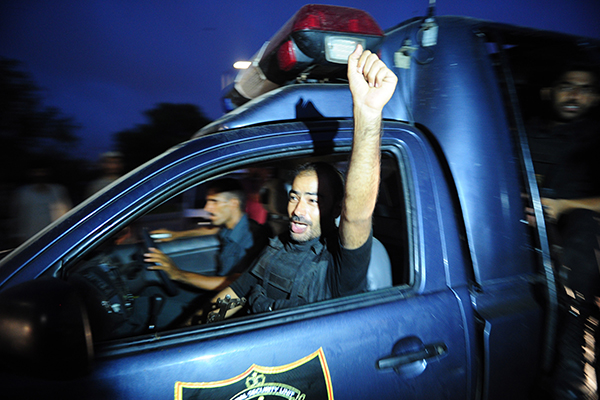 Lessons from the Karachi Airport attack.

Despite the doubters and the what-abouters, it can no longer be doubted that we are in a state of war. The latest in the offensive against this state and society are the June 8 attacks: one in remote Taftan on Shia pilgrims, the second on the airport in Karachi.

There is nothing surprising about either attack. Both are part of a pattern that has played out for a decade, more intensely since 2007. Lives were lost in both attacks. In both, the response of the security forces was commendable. In Taftan, the Levies troops managed to reduce the damage despite the element of surprise being on the side of the terrorists. In Karachi, the Airports Security Force, despite losing four men initially, managed to hold the attackers back until the Rangers and the Army’s Quick Reaction Force arrived on the scene.

Where do we go from here?

The Army/Rangers conducted the operation in two simultaneous phases because there were two interlinked objectives. First, to ensure that civilians were evacuated with no loss of life; second, to ensure that the attackers were confined to the area from where they had entered and not allowed to disperse—particularly toward the hangars or where aircraft were parked.

Both objectives were achieved, even as the initial attack claimed lives. The ASF, given its meager resources and training, did a good job of a holding operation. Yet, this is precisely the vulnerability the attackers tried to exploit. Consider.

The defender has to do the same. Effective defense entails the defender viewing, reviewing and constantly monitoring the possible Vulnerable Points in his Vulnerable Area. He must think like the attacker, devise simulations of possible scenarios, get his men to practice and hone drills required for contingencies. This includes weapons handling, coordination (who will do what, when, how and in coordination with whom), and responses in case of any innovation on the side of the adversary or if he (the defender) has lost men.

This is not the first such attack on an airport. The M.O. of the attackers has not changed either. In all such attacks the element of surprise has been with the attacker. In all cases, the casualties on the side of security forces have been largely during the first phase of an attack even as subsequent response by security forces has improved. The problem then is to figure out how to blunt the element of surprise, given that the attacker will always have that on his side and given that foolproof defense of a public place, like an airport, is not possible.

This is the most difficult question to answer. Part of the answer lies in effective preemption. The intelligence agencies should be able to pick up the spoor of a potential large-scale attack and nip it before it gets underway. That is the ideal situation and may not always come to pass. The point, however, is important because active defense means taking the war to the enemy and, in the case of terrorist groups, it means gathering actionable intelligence to preempt. The other part of the answer lies in using technology, rather than troops, as the first line of defense: technology that can detect lethal materials, alert security forces, and blunt the attacker’s element of surprise. This means manning the outermost perimeter without physical presence of troops and covering that space with firepower. This will give the necessary depth to the troops both for their protection and to increase the vulnerability of the attacker.

But this will still not be enough. Planning must cater for the worst. This is where effective fire-fighting comes in. All Vulnerable Areas must have dedicated forces for effective defense, troops that know the Vulnerable Area inside out, who do not have to resort to maps and schemata when the emergency strikes because they have been trained repeatedly to defend the Vulnerable Area against multiple types of attack.

In this case, the ASF would be such a force. Airports security is the remit of the ASF. And while they performed a good holding operation, they had to rely on the Army’s Quick Reaction Force and the Rangers for the actual operation. That was an intangible Vulnerable Point in this scenario. Put another way, if the ASF did not hold the attackers well, they could have moved to other areas of the airport and the extent of damage would have been greater.

Quick Reaction Forces are important as are police reinforcements for throwing a cordon. But the point is that the main force with the capacity to carry out such an operation at an airport should be the ASF. That means training and equipping the ASF along different lines. The Army’s Quick Reaction Forces should have the confidence, as they are being mobilized, that the force already engaged is trained and equipped to fight it out with or without them. In such an emergency, time is of essence. While in this case the response was quick and the operation was managed by the Corps Commander and D.G., Rangers, who were present on the scene and had set up a control room, troops from outside needed time and help to understand the layout of the facility. A dedicated force doesn’t need to familiarize itself with an area in which it has to operate in an emergency. While there are channels for coordination among security forces now, interoperability also demands joint training and exercises.

There is, of course, also the imperative of revisiting security protocols at the airports. An important aspect of this would be to reduce the number of non-passengers at the airports. It is difficult for Pakistanis to learn to not bring the entire mohalla to the airport with them to see off or receive one passenger, but security requires that this stupid trend be quelled. The worst offenders are, of course, those going for or returning from Haj. Their ‘piety’ must not be allowed to compromise security protocols.

This war is not about to end. We need to begin to train other forces with the same dedication that the Army puts into training its personnel. The Army is already spread thin and cannot be expected to be the main fighting force for every contingency. Additionally, let me agitate here another point which I have repeatedly tried to make over many years. The response to urban terrorism falls under the purview of the police. Police is what we need to focus on. Any takers?

> There is, of course, also the imperative of revisiting security protocols at the airports.

We should start by asking CAA or ASF or whoever is responsible to quit using fake golf ball detectors as explosive chemical detectors.