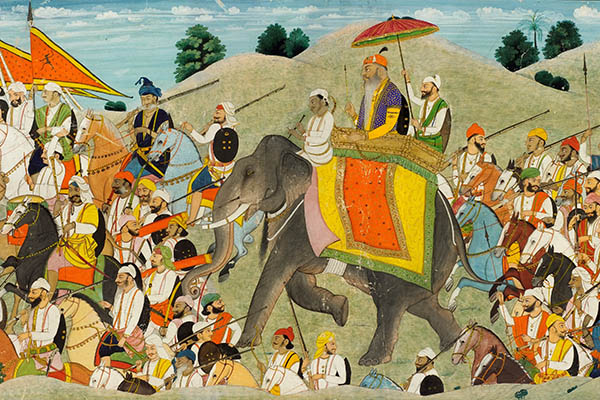 Upon entering the foyer of the recently concluded Empire of the Sikhs exhibition at the Brunei Gallery, London’s School of Oriental and African Studies, spectators are immediately confronted by a formidably large howitzer from the artillery arm of Maharaja Ranjit Singh (1780-1839). Over 6 meters in length, the dramatically gleaming brass, mother of pearl, and dark teak wood of the howitzer represents the military strength of Lahore when the Sikh Empire (1799-1849) was at the height of its power. Its intimidating dimensions are perfectly placed to introduce viewers to the expansive scope of Maharaja Ranjit Singh’s rule, and the interplay between patronage, prosperity and peace that the howitzer represents. Manufactured in Lahore in 1838, the howitzer is based on contemporary British artillery designs of the time. It was one of only 8 howitzers to be captured at the Battle of Gujarat in 1849, and is the only piece of Sikh artillery known to exist in a private collection.

Organized by the U.K.’s Punjab Heritage Association, a charity dedicated to promoting Punjabi history, the exhibition stresses the importance of Ranjit Singh as a shrewd-minded ruler who was not only a threat to the British advancing from the South, but a leader bringing peace and stability to a diverse population. His empire included the Mughal provinces of Lahore, Multan, and Kashmir, and extended into Ladakh and Afghan territories. Singh, blind in one eye from smallpox, was a military strategist whose prowess earned him the title Sher-e Punjab (the Lion of Punjab), as well as ‘Napoleon of the East.’ 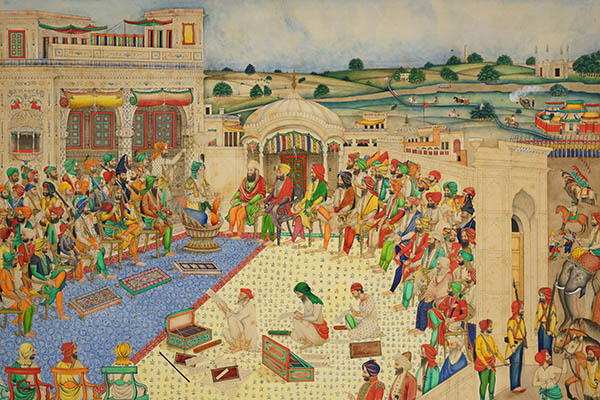 The court of Rangit Singh at the Fort of Lahore by Bishan Singh, circa 1860. Courtesy London’s School of Oriental and African Studies

Singh ruled from Lahore, the historic capital of Punjab, where his court attracted many Western visitors, and great emphasis is placed on the role of firangis (foreigners) in the court, and how this helped the Maharaja establish a prosperous court and remodel his army along modern, European lines. Even before the arrival of Westerners to Lahore, Punjab already boasted a diverse population: the majority were Muslims, followed by Hindus, and finally Sikhs, who were actually a minority at less than 10%.

Particularly highlighted in the exhibition is the contribution of four ex-Napoleonic officers seeking employment in the East after the downfall of their Emperor: Allard, Ventura, Court and Avitabile. Allard and Ventura arrived in 1822, and after confirming that they were not in fact British spies, Singh hired them as officers. A painting of Ranjit Singh’s court on display notably features, near the bottom, a Sikh officer wearing a French-inspired red military uniform.

One of the more effusive examples of the relationship between France and the Sikh Empire was displayed in an ornamental letter from Louis Philippe I delivered to Singh by Allard in 1837: “We vow that the Almighty will make your happiness everlasting, that He will increase the happiness of your family and that of your peoples, and that He will lend… to the guiding star of your victorious flags.” This letter would have been translated into Persian at Lahore (the whereabouts of which remain unknown), whilst the displayed French original was likely taken from the treasury at Lahore in 1849 by John Login, the guardian to Duleep Singh. 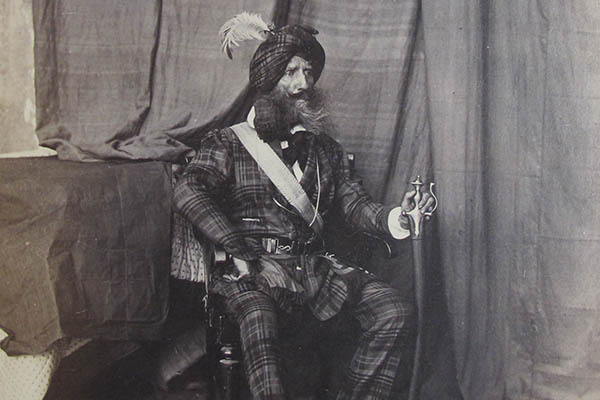 Alexander Gardner, an American mercenary who served as colonel of artillery in the Sikh Empire. Albumen Print by Samuel Bourne, 1864. Courtesy London’s School of Oriental and African Studies

Another foreign figure featured in the exhibition is Wisconsin-born Alexander Gardner, who was employed as a colonel of the Sikh artillery in 1832, becoming known as ‘Gordona Sahib’ (an apt nickname given the eccentric tartan suit and turban he dons in the famous portrait taken of him in retirement). Gardner was also notably the inspiration behind Rudyard Kipling’s The Man Who Would be King.

Prior to the involvement of the ex-Napoleonic generals, Singh’s military was a coalition of private armies he had acquired by expanding into new territories, many of whom harboured their own individual ambitions, leaving Singh vulnerable to unified British attack. The leading French officers integrated into Singh’s military were therefore able to provide European structure and modern military technology, transforming Singh’s forces into a formidable opponent for the British.

The French were also active patrons of the arts, and commissioned miniature painter Imam Bakhsh Lahori to produce portraits of notable figures at the Sikh court. In a gallery in the heart of the University of London’s left-leaning School of Oriental and African Studies, the exhibition appears to address the U.K.’s ever-present anxieties about the value of immigration and diversity. “With modern ideas in the corporate world we talk about the strength of diversity. It is remarkable that a man who was a warrior king who couldn’t read or write… had the foresight to think that that’s what held the empire together,” one of the exhibition’s curators, Amandeep Singh, tells Newsweek. “Before it spectacularly fell apart.”

Also attracting crowds were the many jewels from the Lahore treasury, including the gold earrings and necklace of rebel Maharani Jind Kaur, one of Ranjit Singh’s wives, who was torn away by the British from her only child, Maharaja Duleep Singh. These finely decorated gold and seed pearl earrings were part of the family jewels which Duleep Singh’s son, Prince Victor Duleep Singh, sold to pay off his debts in 1899. But perhaps the best symbol of the cusp between greatness and defeat is the replica of Koh-i-Noor Diamond, the most famous diamond in the world, seized and presented to Queen Victoria in 1850 by Lord Dalhousie. Although the original diamond is now a part of the Crown Jewels, the replica of the uncut Koh-i-Noor at the exhibition is set in the amulet in which it was delivered to Queen Victoria. 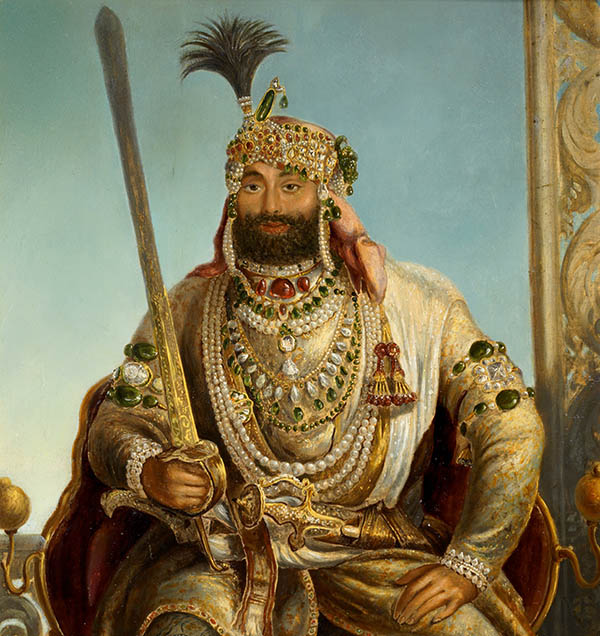 The diamond can be seen in its former glory in the portrait of Maharaja Sher Singh, the son of Ranjit Singh. The painting by Hungarian artist August Schoefft was a result of his extravagant patronage at Lahore, where Sher Singh was a keen patron of the arts. Singh seems almost paralyzed by the weight of the jewels, which bolster his already considerable size. Covered with jewels from the Lahore State treasury, Koh-i-Noor is set into Singh’s right armlet, with the Mughal Timur Ruby assuming pride of place on his chest.

The exhibition closes with the annexation of Punjab, moving on to the role of Sikhs in the 20th century and their contribution to the World Wars.

Following a period of civil strife after Ranjit Singh’s death in 1839, the throne would fall in to the hands of five-year-old Duleep Singh, who was ultimately defeated in the Second Anglo-Sikh War in 1849, after which the territories of the Sikh empire were annexed to British India. A child’s sword stands on display as a chilling reminder of the human cost of that time, which can seem so distant nearly 170 years later.

The splendor of the Sikh empire is clear in the exhibition, as is the knowledge that this very splendour proved short-lived: the artillery modernization which Ranjit Singh galvanized using the talents of his diverse court was destroyed by the British following the Anglo-Sikh wars; the Koh-i-Noor was repeatedly cut until it could eventually be set into the Crown Jewels, considerably smaller in size than the diamond which adorned Sher Singh’s armband.

The popularity of the exhibition and its resonance with young Sikhs draws attention to an obvious issue: could these objects, taken from a flourishing empire which was brought to its knees too soon, ever find a permanent public space in which to live out the legacy of the Sikhs? “That is definitely a part of the vision we [the UKPHA] have and it’s shared by many Sikhs in this country,” says Amandeep Singh. Whilst the exhibition features loans from the Victoria & Albert Museum and the Royal Collection, both of whom boast some of the finest South Asian collections in the U.K., the exhibition is in large formed from by private collections—primarily, the Toor Collection, belonging to the leading private collector of Islamic and Indian art, Davinder Toor.

When asked if he felt that Sikh history had been neglected in mainstream galleries and museums, Singh responded, “I would argue very much so that they’ve been overlooked. They are highly relevant stories for the Sikh community, as was evidenced by the 30,000 people who came through the door during the 11 weeks.” With these hopes of a permanent space somewhere on the horizon, many of these objects will return to storage after the successful run of the exhibition organized by a team of only three and with ample volunteer support from UKPHA. Gone far too soon—much like the kingdom it featured—Empire of the Sikhs provided an absorbing insight into a thriving empire, and the crucially cosmopolitan court at its heart.