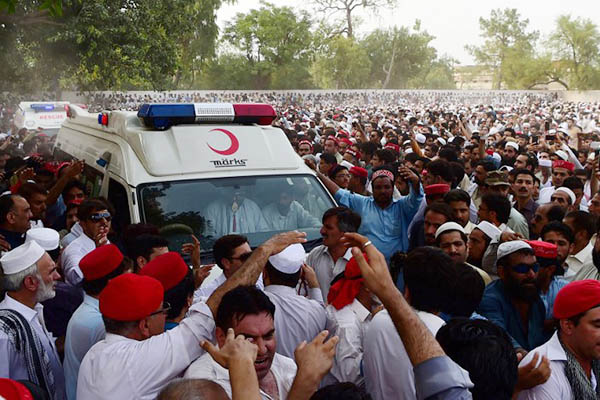 Thousands flocked to the funeral on Wednesday of a politician killed by a Taliban suicide bomber in Peshawar, hours after the explosion left 20 dead in the first major attack ahead of July 25 polls.

A senior police official estimated that 30,000 people attended the funeral of the local leader of the Awami National Party (ANP), Haroon Bilour, who was among those killed in the attack late Tuesday during an election rally.

Party workers cried and hugged, while others looked on in shock as funeral prayers were said. Markets were also closed across the bustling frontier hub near the Afghan border out of respect for those killed in the attack.

The ANP has been targeted by Islamist militants in the past over its vocal opposition to extremist groups like the Taliban. The bombing came hours after Pakistan’s military spokesman said there were security threats ahead of the national elections.

Bomb disposal chief Shafqat Malik told AFP that the suicide bomber—who he said was around 16 years old—had eight kilograms of explosives and three kilograms of pellets, ball bearings and other shrapnel on his body.

Peshawar lawyers went on strike on Wednesday to protest and mourn the death of Haroon, who was also a barrister.

Bilour was one of the ANP’s election candidates and belonged to an influential political family in the Khyber-Pakhtunkhwa province, of which Peshawar is the capital. His father Bashir Bilour, one of the ANP’s top leaders, was also killed by a suicide bomber in 2012.

Police said the bomber struck when Bilour was about to address some 200 supporters.

Mohammad Khorasani, spokesman for the Tehreek-e-Taliban Pakistan (TTP) militant group, claimed responsibility for the attack in a statement. He said the militants “have already declared a war” on the ANP and called on the public to keep away from them, “or you will be responsible for your own loss.”

Peshawar is considered a gateway to Pakistan’s troubled semi-autonomous tribal regions, where many militant groups—including Al Qaeda—operated until the government launched operations to oust them.

The attack comes weeks after the TTP’s leader Maulana Fazlullah was killed in a drone strike in Afghanistan in what the Pakistan Army called a “positive development.”

Militants have targeted politicians, religious gatherings, security forces and even schools in Peshawar. But security across Pakistan, including in Peshawar, has dramatically improved since government and military operations in recent years. Analysts warn however that Pakistan has yet to tackle the root causes of extremism.