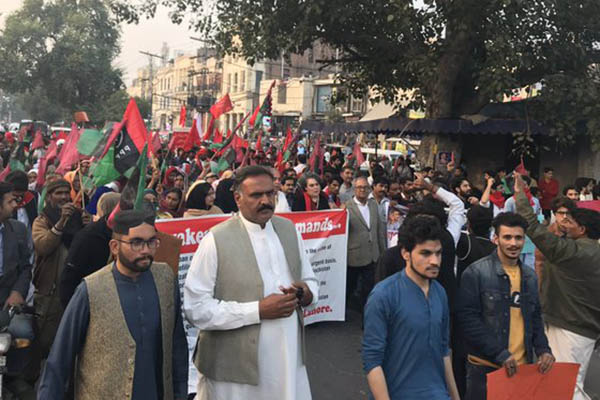 Students, academics, politicians, activists and civil society supporters rallied across Pakistan on Friday as part of the Student Solidarity March, demanding the government restore student unions to give the youth a say in how educational institutions operate.

Apart from student unions, the protesters also demanded the government introduce legislation for the creation of independent sexual harassment committees on varsity campuses; an end to discrimination based on gender and ethnicity; a 10 percent increase in the education budget; and the demilitarization of campuses.

According to local media, the country’s major metropolises predictably boasted the largest gatherings. Participants in Lahore, the capital of Punjab province, converged on the Punjab Assembly, and said they had 13 demands of the government. Believed to number in the thousands, the protesters carried posters of revolutionary leaders such as Che Guevara and Rosa Luxemburg. There were also several posters of Mashal Khan, the left-leaning student who was lynched to death at Mardan’s Abdul Wali Khan University in 2017.

In federal capital Islamabad, the protesters marched from the Press Club to D-Chowk. Supported by members of the Awami Workers Party, the speakers demanded they be given the freedom to express their thoughts and their demands directly to administrations, without the interference of bureaucratic intermediaries.

In Karachi, the capital of Sindh province, hundreds marched to the Karachi Press Club, where writer Mohammed Hanif and activist Jibran Nasir joined them. Nasir, who contested the 2018 general elections from an independent platform, said he wished to support the country’s future by backing the valid demands of students.

In Peshawar, the capital of Khyber-Pakhtunkhwa, the Awami National Party backed the protest, with leaders saying students must be granted the full right to freely assemble and speak for their rights. In Quetta, the capital of Balochistan, hundreds came out to have their voices heard despite ongoing security threats and a recent move by the provincial government to ban all student-led political activity.

A common theme in all the protests was rejection of the view that unions hamper educational efforts in universities. Protesters said it was blatantly unfair that teachers and staff could form unions to express their concerns, but students were barred from doing the same.

While some government officials have backed the protest, including Federal Minister for Science and Technology Fawad Chaudhry, Islamabad has yet to issue any formal response to the protest.