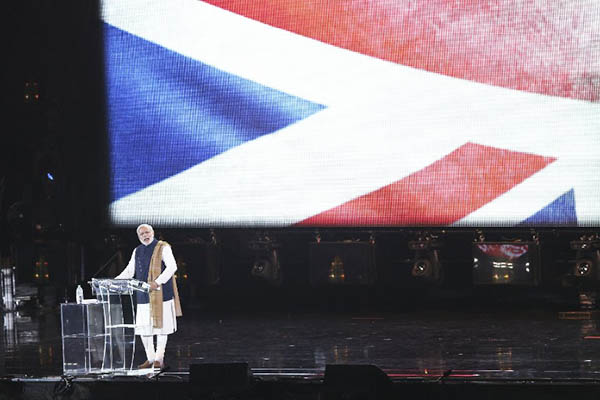 Supporters of Indian leader claim he will transform India into a superpower.

Members of Britain’s large Indian diaspora, many waving India’s tricolor flag and wearing Modi masks, chanted the visiting leader’s name and let out a deafening cheer as he took to the stage for an hour-long speech, which combined soaring rhetoric with detailed policy strategy.

On a chilly night, Modi broke the ice with a joke, saying “they told me England would be cold, but not this cold!” He called it a “historic day,” and attempted to counter accusations of neglecting minorities by paying tribute to Sikhs who had “spilled blood to protect Mother India,” although was more reserved on Muslims, calling for a deeper Sufi influence.

Both Sikhs and Muslims were among around 500 protesters who barracked departing Modi supporters along the fabled Wembley Way. A police line separated the opposition groups in scenes more often witnessed after a heated football match.

Earlier, the crowd danced in the aisles as they were entertained by a raft of singers, dancers and musicians. Slick videos highlighted India’s economic prowess, in a muscular production underscoring the country’s shift from British colonial possession to a global power courted for its vast markets, deep-pocketed investors and strategic importance.

“We are here to experience the aura of Modi, it is the aura of truth and development. There is no comparison for him in this era,” said audience member Mahdu Kabra, 32.

The event also underscored Modi’s shift from political pariah to, according to his many supporters, India’s savior, after he swept to office last year promising economic reform and less bureaucracy. Only a few years earlier, Britain and several other countries had shunned Modi due to accusations he turned a blind eye while he was chief minister of Gujarat to 2002 communal violence in which hundreds were killed.

“All great leaders had protests, look at Churchill. This is a trivial and fragile way to bring him down. It’s a political vendetta,” Kabra said.

The iconic British stadium had been thoroughly Indianized for Modi’s visit, with burger vans replaced by kiosks selling chicken tikka and samosas. Inside, the sacred turf had been covered with two giant lotus leaf designs, one in Union Jack colors, another in the white, green and saffron of the Indian tricolor. The Indian flag had also been recreated by covering seats with plastic sheets behind one goalmouth, where a stage had been set up.

“The development Mr. Modi has done in the last 10 years, since he has been chief minister over there, has been unbelievable,” said Suresh Bhojani, 37, from Bolton. Also on stage, British Prime Minister David Cameron garnered applause, telling Indians that they put the “great into Great Britain.”

He drew Wembley’s loudest cheer since Raheem England scored for England last month when he called for India to have a permanent seat on the United Nations Security Council, before bringing the house down with a bold prediction. “It won’t be long before there’s a British Indian prime minister in Downing Street,” he told them.

Modi brought the event to a close by setting off a huge firework display that illuminated the stadium as part of Diwali celebrations.