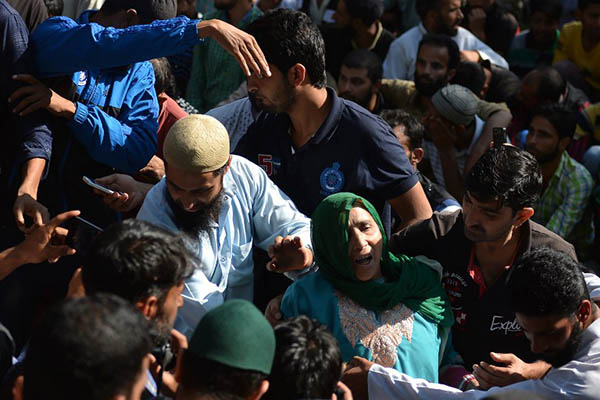 Indian soldiers and protesters in India-administered Kashmir clash during funeral for 11-year-old.

Thousands of angry demonstrators defied a curfew on Saturday in India-administered Kashmir to attend the funeral of a schoolboy whose body was found riddled with pellets, sparking clashes with security forces across the restive region.

The 11-year-old boy’s body was found late Friday in the outskirts of Srinagar, in Harwan, after security forces used pellet guns to break up protesting crowds despite the government vowing to replace the weapons.

India-administered Kashmir has been hit by months of violent protests over the killing of a young militant by Indian soldiers. Government forces fired tear gas shells on Saturday to disperse stone-throwing protesters, triggering more clashes in at least half a dozen places across Srinagar and southern parts of the Himalayan valley.

“Forces responded when large crowds defied restrictions. Many were injured on both sides during the clashes that followed,” a local police officer told AFP on the condition of anonymity. Another police official said nearly 100, mostly protesters, had been injured in the latest protests.

The killing of the schoolboy took the death toll to 81 in the worst violence to hit the Muslim-majority territory since 2010. New Delhi has been coming under growing pressure over the level of casualties in India-administered Kashmir during the protests against Indian rule, which broke out after the death of a popular rebel leader on July 8 in a gunbattle with soldiers. Most have died in clashes between protesters and government forces who have fired tear gas and pellet guns at demonstrators.

India’s home minister police and troops would use chili-based shells instead of ones filled with birdshot after hundreds of civilians sustained serious eye injuries in the clashes. The metal pellets or birdshot fired from the pump-action shotguns rarely result in deaths, but can often blind victims if the fragments hit them in the eye.

Authorities have imposed a curfew across large parts of the region, with schools, shops and many banks closed. Internet and mobile networks have also been cut off in a bid to prevent protests.

Kashmir has been divided between India and Pakistan since the two gained independence from British rule in 1947. Both claim the territory in full. Several rebel groups have for decades fought Indian soldiers—currently numbering around 500,000—deployed in the territory, demanding independence for the region or its merger with Pakistan.

Tens of thousands of people, mostly civilians, have died in the fighting.