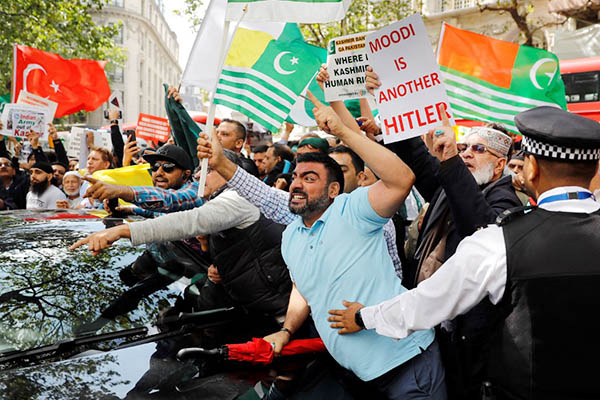 Several thousand people protested on Thursday outside the Indian embassy in London against New Delhi’s move to strip India-Occupied Kashmir of its autonomy.

The protesters held up signs reading “Kashmir is bleeding” and waved Kashmiri and Pakistani flags. Police separated them from a smaller pro-Indian counter-demonstration. AFP reporters saw police making at least one arrest.

“Everybody has to stand up. This is a turning point,” said Shazad Ahmed, a 36-year-old IT worker from Pakistan-administered Kashmir, who was attending the protest with his wife and two daughters.

Mohammed Beshir, 76, also from the Pakistani part of Kashmir, said: “We want the British people to intervene.”

Kashmir is split between arch-rivals India and Pakistan. The Indian-controlled parts of Kashmir have been in lockdown since Aug. 4, with freedom of movement restricted and phones and the internet cut. A day later, New Delhi scrapped Article 370 in the Indian constitution that granted Kashmir special autonomy.

The United Nations Security Council is scheduled to discuss the issue at a closed-door meeting on Friday.