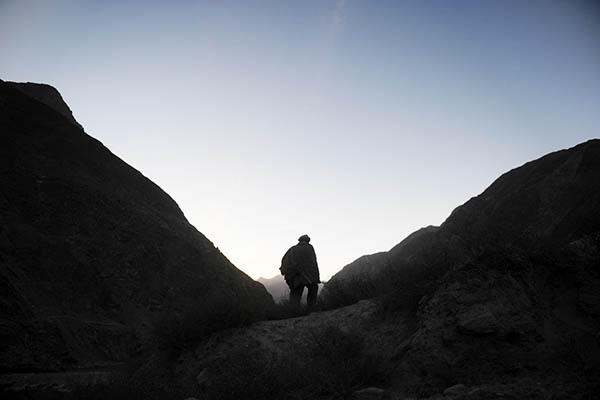 Landslides buried a village in northern Afghanistan on Friday, killing at least 350 people and leaving thousands of others feared dead, as rescuers searched desperately for survivors trapped under the mud.

Villagers at the disaster site in Badakhshan province used shovels to dig through rocks and dirt, with national authorities, the United Nations and the U.S.-led military force all racing to assess the damage and provide help.

Badakhshan governor Shah Waliullah Adeeb said by telephone that the death toll could be as high as 2,500. “Our initial findings based on local people’s reports show around 2,500 people, including women and children, might be dead,” he said. “It is difficult to get confirmed information from the scene and we are seeking to determine the facts.”

Provincial officials said that two successive landslides hit Aab Bareek village within one hour as a hillside collapsed, engulfing hundreds of mud-brick homes. Villagers were at Friday prayers in two mosques when they were swamped by a tide of debris, and the second landslide hit many who had rushed to assist those in need.

“The number of deceased has increased to 350,” the U.N. mission in Afghanistan said in a statement. “A response is being mobilized for those who survived but were displaced, with some partners already on the ground. [NATO’s] Regional Command in the north [is] in contact with the Afghan National Army in regards to search and rescue efforts.”

Badakhshan is a remote, mountainous province in northeast Afghanistan bordering Tajikistan, China and Pakistan. It has been relatively peaceful since the U.S.-led military intervention began in 2001, but has seen increasing Taliban activity in recent years.

President Hamid Karzai expressed his condolences to those affected and said immediate action was being taken to save survivors as emergency efforts continued after darkness fell.

Local officials said that the landslides occurred at about midday in the Argo district of Badakshan after days of heavy rain. Between 350 and 400 houses were destroyed, they said.

“It is a disaster. The landslide has affected around 1,000 families,” said Sayed Abdullah Homayun Dehqan, provincial director of the Afghan National Disaster Management Authority. “Around 300 families are missing, that could involve around 2,000 people. People are working to remove the rocks, so far three bodies have been recovered. Around 700 families were rescued, we have sent in some basic assistance such as tents and blankets.”

The U.N. was helping to coordinate authorities to find survivors, but warned that roads to the area could not take heavy machinery and that further landslides were a risk. “The foremost priority at the moment is saving as many lives as possible of those still beneath the rubble,” said Mark Bowden, U.N. humanitarian coordinator in Afghanistan. “The U.N. system is fully engaged in the ongoing effort and is mobilizing more capacity and resources to bolster the response.”

“We stand ready to help our Afghan partners as they respond to this disaster,” he told a press conference in Washington with German Chancellor Angela Merkel.

The landslides follow recent severe flooding in other parts of northern Afghanistan, with 150 people dead and 67,000 people affected by floods in Jowzjan, Faryab and Sar-e-Pul provinces. Nearly 3,500 houses were damaged and destroyed by the floods, creating an urgent need for shelter, clean water, medical supplies, and food.

The floodwaters swept through villages, inundating thousands of homes and leaving many people seeking safety on the roofs of their houses. The floods also destroyed farmland and killed livestock across the remote region.

Flooding and landslides often occur during the spring rainy season in northern Afghanistan, with flimsy mud houses offering little protection against rising water levels and torrents of mud. In the last major flooding in Afghanistan, 40 people died in August in flash floods in eastern and southeastern provinces and some districts of the capital Kabul.

Neighboring Pakistan suffered the worst floods in its history in 2010, when almost 1,800 people died and 21 million people were affected.