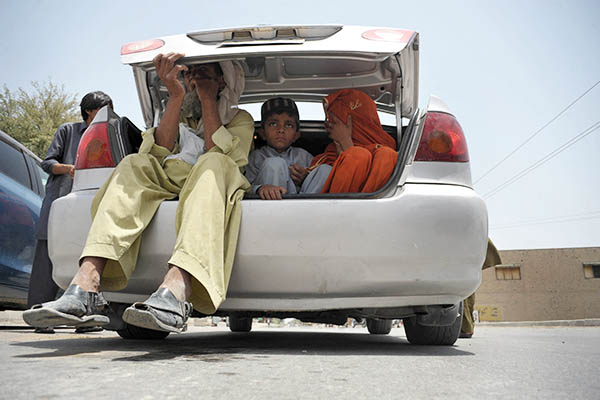 Around 30,000 people fled a major military offensive against the Taliban in North Waziristan on Wednesday, after authorities eased a curfew in a sign the campaign is likely to intensify.

The military has deployed troops, tanks and jets in the tribal area on the border with Afghanistan, in a long-awaited crackdown on the Taliban and other militants. Adding to pressure on the insurgents, two U.S. drone strikes hit compounds in the area early on Wednesday.

The military eased a curfew in parts of North Waziristan to let civilians leave, indicating a new and more intense phase of the anti-militant drive in which ground forces will play a greater role. Tens of thousands of people had already fled the operation, which the military says has killed more than 200 militants, and a fresh exodus is under way.

Most have gone to the town of Bannu, just across the border from North Waziristan in neighboring Khyber-Pakhtunkhwa province and a traditional haven for those fleeing violence in the tribal area. Registration points and camps have been set up to deal with the influx of people, but most prefer to travel on to stay with relatives in other areas.

A senior security official in northwest Pakistan said the curfew was lifted to let people flee before a more concerted ground operation. “Miranshah and Mir Ali have already been cordoned off. Ground troops will move in after civilians move to safe places,” the official said. “First, ground troops will enter in major towns and will then move toward the suburban areas,” after strengthening their positions. “We will then go to the villages and to the mountains,” he added, saying the operation would continue until every militant had been eliminated.

A second security official in the northwest confirmed the details.

At least five suspected militants were killed in two separate U.S. drone missile strikes in North Waziristan, according to local officials. Pakistan condemned the strikes and said it regarded them as “a violation of its sovereignty and territorial integrity.”

“These strikes also have a negative impact on the government’s efforts to bring peace and stability in Pakistan and the region,” the foreign ministry said in a statement on Wednesday. Islamabad has previously described drone attacks in similar terms, although leaked documents have shown cooperation on them with the U.S. in the past.

The number and identity of those killed in the military operation cannot be verified, and some residents who have fled the area spoke of civilian casualties from aerial bombing before the offensive officially began on Sunday.

Aziz-ur-Rehman, a 42-year-old teacher at a school in Mir Ali, fled the town riding on the bonnet of a truck. “It’s like doomsday for people in Mir Ali, where death is everywhere since Saturday,” he said, accusing the military of killing numerous civilians. “They start the day with artillery shelling early in the morning. Gunship helicopters come for shelling during the day and jets strike at around 2:00-2:30 in the night.”

He said the onslaught killed two children in his neighborhood and left a third girl badly wounded. Rehman was one of around 9,000 people who arrived in Bannu on Wednesday, according to Arshad Khan.

Many streamed into the town carrying their possessions—quilts, buckets, mats, water coolers, even livestock and family pets. One family even brought three parrots in a cage. As they left North Waziristan and entered Khyber-Pakhtunkhwa province, people were issued with ration packs containing biscuits, tea, sugar and milk.

Thousands of people have also fled across the border into the Gorbaz district of Afghanistan’s Khost province, according to local officials there, and are being given food and aid.