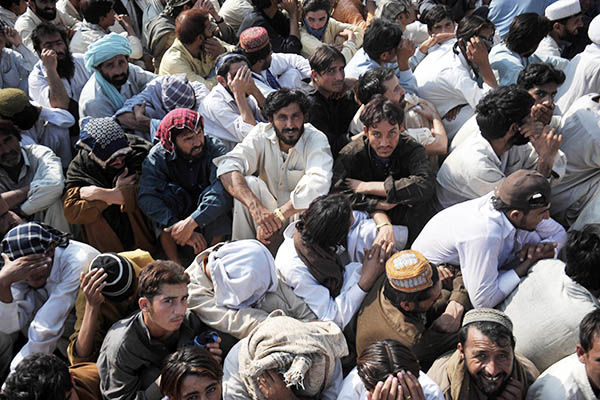 Tens of thousands of people from Pakistan’s tribal areas have fled their homes fearing a long-awaited military operation is imminent, officials and residents said Monday.

A government official in Peshawar said that some 58,000 people, mostly women and children, had fled North Waziristan district since airstrikes targeting militants in late May killed at least 75 people.

The exodus has increased rapidly in recent days, with more than 25,000 fleeing their homes in the last 48 hours alone, he added.

An official in the district’s main town of Miranshah confirmed the migration was underway to various parts of Khyber-Pakhtunkwha province. “I am taking my family to a safer location,” said one resident who did not wish to be named.

The rugged district that lies on the border with Afghanistan is the main stronghold of Taliban and Al Qaeda-linked militants in the lawless tribal belt after the Pakistani military launched offensives in the six other districts.

An offensive in North Waziristan has been rumored for years but analysts remain cautious about whether the military has the capacity to attempt such a move without assistance from the Afghan side of the border where militants are likely to flee in the event of an attack.

A ground operation could also anger militants who are seen as more friendly to Pakistan but whom the U.S. accuses of using North Waziristan as a base to target Afghan and NATO troops, such as the Haqqani network and the faction led by warlord Hafiz Gul Bahadur.

The latest rumors of an operation began after government talks with the umbrella Tehreek-e-Taliban broke down in April, and were further stoked by the air strikes and the widespread distribution of a leaflet from Bahadur last week warning residents they should leave their homes by June 10.

Officials and elders said that residents from the area had formed a 65-member Jirga comprising members of the Utmanzai tribe, who had held last-ditch talks with the military and government in Peshawar on Friday to avert the offensive.

“The jirga had meetings last week with the governor [of] Khyber-Pakhtunkhwa and the corps commander [of] Peshawar, demanding a halt in the airstrikes and offering to solve the issue with talks. The government wanted the residents to hand over foreign militants in exchange,” a senior security official in Peshawar said.

The jirga members held separate talks with the pro-Pakistan warlord Bahadur on Monday, according to a tribal elder and a member of jirga.

Because of sheer cowardice and prevarication Pakistan missed a golden opportunity to carry out a hammer and anvil attack in synchrony with NATO to wipe out Haqqanis and their ilk.