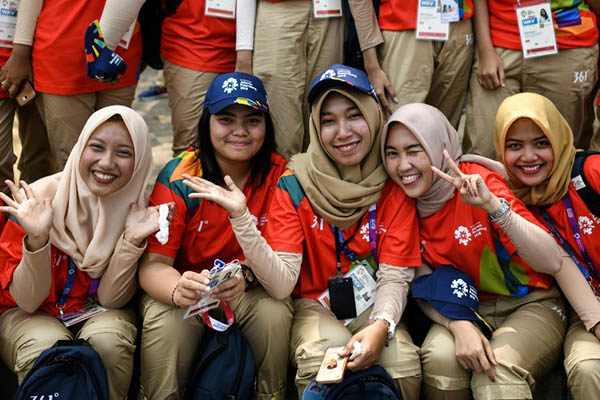 Organizers are making reassuring noises about their arrangements but Indonesia has never hosted a sports event on this scale, with 16,000 competitors and officials descending on Jakarta and Palembang, a sleepy port city on Sumatra island.

While the Olympics have a slightly higher number of participants, the Asian Games is ahead in terms of complexity: it has 40 sports, including the full Olympic program and some lesser-known regional favorites.

Olympic heavyweights China will expect to retain their position at the top of the medals table, ahead of Japan and South Korea—who will march with North Korea at the opening ceremony, and form joint teams in women’s basketball, canoeing and rowing.

For many of the 45 competing nations, who represent about two-thirds of humanity, the quadrennial event is the pinnacle of the sporting calendar, offering a chance for medals that remain elusive at Olympic level.

Indonesia’s notorious haze from forest fires is another concern, while organizers are hoping to mitigate Jakarta’s grinding traffic with dedicated lanes, banning odd and even license plate numbers on alternate days and closing schools.

Minor hiccups abound, from misspelt signs to a clumsy attempt to hide a foul-smelling, toxic waterway running past the athletes’ village by covering it with a nylon mesh.

In Palembang, fans angered by a football result ripped up seats at an Asian Games stadium last month, and Indonesia’s first light rapid transit railway has suffered a series of malfunctions in the countdown to the start of competition.

Indonesia agreed to step in as hosts at short notice after Vietnam withdrew in 2014, put off by the eye-watering projected costs.

Indonesia’s track record is not encouraging: the 2011 Southeast Asian Games in Jakarta and Palembang were plagued by corruption and delays, while two people died in a stadium stampede at the football final. But this time around, chief organiser Erick Thohir, the savvy businessman who is president of Inter Milan, promises that Indonesia will be able to cope.

“There are no problems for the preparation so far,” Thohir said last week. “Even if we have problems we will solve them right there, right then.”

Among the bigger names, Tottenham Hotspur forward Son Heung-min looks set to light up the football competition for South Korea, while Chinese Olympic champion Sun Yang will go for multiple golds in the swimming pool.

Singapore’s Olympic butterfly champion Joseph Schooling is also eyeing a busy program, while Malaysian legend Nicol David will defend her squash title and the cream of Asia will contest a world-class badminton competition.

The Asian martial arts of kurash, sambo and pencak silat are also in the schedule, while paragliding, jet-skiing and even the card game bridge make an appearance. And in a dash of modernity, the screen-bound pursuit of eSports will be held as a demonstration event, prior to its introduction as a full medal sport at the 2022 Asian Games in Hangzhou.