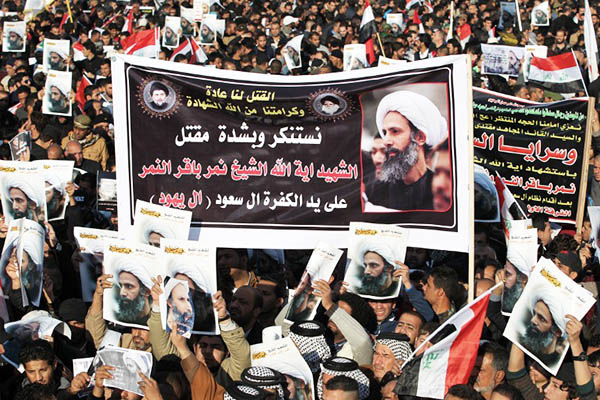 Thousands of supporters of a prominent Iraqi Shia cleric protested near the foreign ministry Monday to demand Baghdad sever ties with Saudi Arabia.

The demonstrators chanted slogans praising their leader Moqtada al-Sadr and condemning the execution by the Riyadh authorities of Saudi Shia cleric Nimr al-Nimr. The execution on Saturday sparked outrage across the Shia world and beyond, with leaders accusing Saudi Arabia of attempting to stoke tensions across the region.

“We demand that the Saudi embassy be closed down and all Saudi interests terminated,” said Ahmad, one of the more than 5,000 protesters in central Baghdad. The crowd, which had gathered near one of the entrances to the fortified “Green Zone” where the Saudi embassy is located, threatened to force its way in but was held back by organizers and riot police.

“Government, find a solution because today we will burn the embassy,” the crowd chanted.

Protesters set fire to Saudi Arabia’s embassy in Tehran on Saturday, leading Riyadh to break off diplomatic relations with Iran.

The Gulf monarchy was followed by Bahrain and Sudan in severing ties with Tehran.

The Saudi embassy in Baghdad only reopened on Dec. 15, a quarter of a century after relations were broken over Iraq’s invasion of Kuwait. “We demand that the government close the Saudi embassy, kick out the ambassador and boycott all Saudi products and products from allied countries,” said Hatem Oraid, a lawyer at Monday’s demonstration.

The protest ended without any incident.

The government of Iraq has responded to Nimr’s execution with statements warning against any attempt to fuel sectarian tensions in the region.