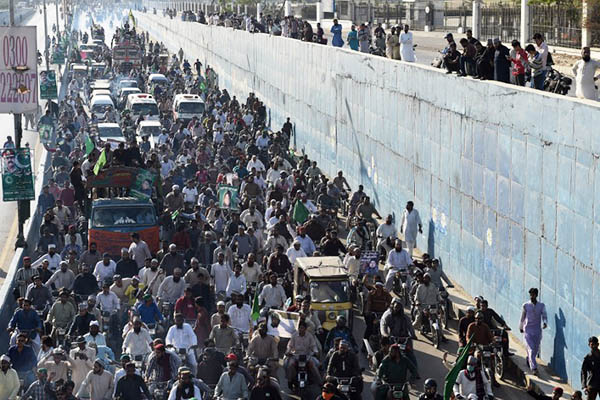 Thousands protested across Pakistan on Monday against the execution of a man hailed by hardline Islamists as a hero for killing a provincial governor who was seeking reform of the blasphemy law.

Protests against the hanging of Mumtaz Qadri were held in Karachi, Lahore, Islamabad and several smaller cities, with demonstrators burning tyres and chanting slogans. But most rallies dispersed peacefully after security was stepped up at flashpoints across the country of some 200 million, including in Rawalpindi where hundreds of supporters gathered at Qadri’s family home.

Qadri, a police bodyguard to Salmaan Taseer, shot the liberal Punjab governor 28 times at an Islamabad market in 2011. He said he was angry at the politician’s calls to reform the blasphemy law.

Blasphemy is a hugely sensitive issue in the Islamic republic, and Qadri was hailed as a hero by many conservatives eager to drown out calls to soften the legislation. Critics say the law, which carries the death penalty, is largely misused, with hundreds languishing in jails under false charges.

Analyst Hasan Askari said the next 24 hours would be “sensitive” for the government, adding that Islamabad had weighed the danger of mass violence against the need to “wash away the suspicion” of sympathy for militancy.

The biggest protest was held in Karachi on Monday afternoon, with around 7,000 people taking to the streets. In Lahore, around 1000 people protested, while hundreds others demonstrated in Pakistan-administered Kashmir, Peshawar, Multan, and other smaller cities. Up to 900 people demonstrated in Quetta.

Most channels led their bulletins with Sharmeen Obaid-Chinoy’s win for best short documentary at the Oscars.

Mosques near Qadri’s family home broadcast the news, with cries heard from inside the house as hundreds of mourners arrived. The funeral is expected to be held today.

“I have no regrets,” said Qadri’s brother Malik Abid, tears rolling down his cheeks, while women chanted nearby. He said the family had been called to the prison Sunday evening by officials who said Qadri was unwell. But when they arrived, Qadri greeted them with the news that authorities had deceived them and that his execution was imminent.

“I am proud of the martyrdom of my son,” said Qadri’s father Bashir Awan, adding he was ready to sacrifice all five of his other sons “for the honor of [Islam’s] Prophet.”

Taseer’s son Shehryar said on Twitter the hanging was a victory for Pakistan, but not for his family. “The safe return of my brother is the only victory my family wants,” he wrote, referring to his sibling Shahbaz Taseer, who was kidnapped in 2011—reportedly by the Taliban.

As well as calling for blasphemy law reform, Taseer had been vocal in his support of Aasia Bibi, a Christian woman who has been on death row since 2010 after being found guilty of blasphemy.

Qadri’s lawyers drew on Islamic texts to argue that he was justified in killing Taseer, saying that by criticizing the law the politician was himself guilty of blasphemy. That argument was rejected by the Supreme Court, which in December upheld the death sentence, sparking rallies.

Pakistan ended a six-year moratorium on the death penalty in December 2014. Last month authorities announced they had executed 332 people since then.

Rights group Amnesty International condemned the execution. “The death penalty is always a human rights violation, regardless of the circumstances or nature of the crime,” said the group’s South Asia regional director, Champa Patel.