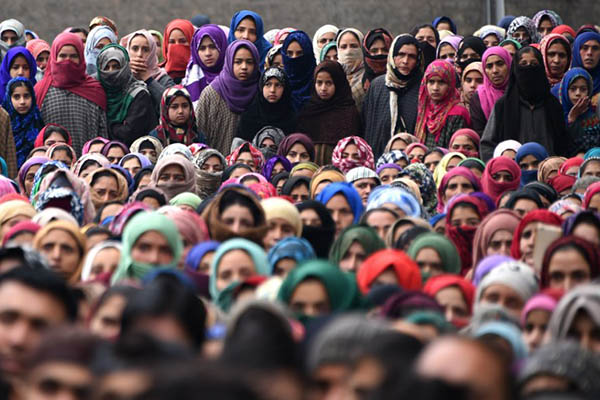 Mudasir Ahmad Parrey, a 14-year-old, is the youngest-ever fighter to be killed in restive region

Thousands of mourners thronged the funeral on Monday of a 14-year-old fighter shot dead by troops in India-administered Kashmir, the youngest-ever fighter killed in the decades-long insurgency, police said.

Mudasir Ahmad Parrey was killed alongside two other alleged militants, one a 17-year-old, outside the city of Srinagar on Sunday.

Parrey, a ninth-grade student, went missing in August before emerging in a photograph on social media brandishing an automatic assault rifle and military knife.

The young boys’ deaths sparked angry protests in the restive Himalayan region administered by India but also claimed in full by Pakistan. A funeral procession on Monday for the slain teenagers turned violent as mourners clashed with police, who used tear gas to drive them back.

Kashmiris fighting for independence or a merger with Pakistan have been warring with Indian troops in the disputed territory since the late 1980s. The violence has left tens of thousands dead, mostly civilians. But this year has been the deadliest in a decade in Kashmir, with rights monitors saying more than 500 people have been killed from armed conflict.

Many young men die fighting Indian troops but Parrey’s death shocked even a region weary from years of bloodshed. At 14, police said he was the youngest known fighter to have died in the insurgency. He was killed in an 18-hour siege by Indian troops in Hajin, outside Srinagar. The home Parrey and his two companions were holed up in was blasted to rubble.

“He had never failed in school exams,” mourned his father, Rashid. The teenager also sometimes worked as a laborer to help out with family expenses, he added.

Many Kashmiris sympathize with the men fighting half a million Indian troops stationed in the heavily militarized Muslim-majority region. Civilians often pelt soldiers with stones while they are conducting search operations for suspected militants, and funerals for slain fighters draw thousands of mourners and see shops closed.

New Delhi has long accused Islamabad of stoking anti-India sentiment in the region and funding militant groups like Lashkar-e-Taiba fighting in Kashmir. Police believe the teenagers killed in Sunday’s fighting joined the group around August. The third dead fighter is a Pakistani national, police claim.

Pakistan says it only provides diplomatic support to the Kashmiri struggle for right to self-determination.

Arrest and send all persons attending such funerals to a Chines style re-educational centre.
No food, till they say “Jai Hind” 1000 times daily.