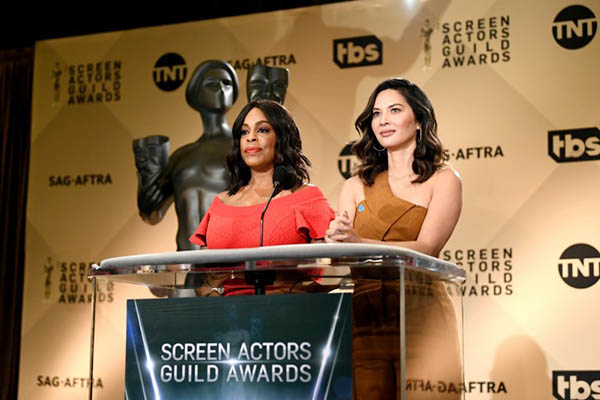 ‘Big Little Lies’, ‘Stranger Things’ and ‘Glow’ tied at four nominations each on TV side

Martin McDonagh’s black comedy crime story Three Billboards Outside Ebbing, Missouri scored the most nominations on Wednesday for the Screen Actors Guild Awards, seen as a major bellwether for the Oscars.

On the television side, three series were tied at the top with four nominations each: HBO drama Big Little Lies and—including the stunt team nominations—Netflix sci-fi thriller Stranger Things and wrestling comedy Glow.

The SAG nominations are the second major announcement in Tinseltown’s glittering awards season, which climaxes with the Academy Awards in March.

Three Billboards, starring McDormand as a mother seeking to avenge the rape and murder of her daughter, picked up six Globes nods and has been has a top Oscars contender since taking the influential audience award at the Toronto International Film Festival in September. Although less high-profile than the Globes, the SAG awards are seen as more of an indicator of Oscars glory, since members represent some 1,200 of the roughly 6,000 voters for the Academy of Motion Picture Arts and Sciences.

The awards were being closely watched this year as they come with Hollywood engulfed in the worst sexual misconduct scandal in its history. Allegations from harassment to rape have sparked the downfall of numerous powerful industry players, from movie mogul Harvey Weinstein to actors Kevin Spacey, Jeffrey Tambor and Louis C.K. to filmmaker Brett Ratner.

None of the Hollywood figures directly involved in the scandal were rewarded by SAG, although Spacey’s House of Cards co-star Robin Wright was nominated.

Gabrielle Carteris, president of the SAG-AFTRA actors’ union, said the flood of accusations showed that victims were feeling empowered at last to speak out. “And if we continue to allow and to hear those voices, and then start to change… the way that we do certain things, we can actually shift our culture,” she said.

It was a big morning for streaming giant Netflix, topping the pile with 19 nominations, nudging in front of premium cable provider HBO (12) and comfortably ahead of the top broadcast network, NBC (3).

While many of the nominees were expected, several shows and their stars were surprise omissions from the announcements, delivered by actresses Olivia Munn (X-Men: Apocalypse) and Niecy Nash (Claws, The Soul Man) in West Hollywood.

The much-fancied cast of Netflix’s acclaimed Unbreakable Kimmy Schmidt came away empty-handed and, on the film front, there was nothing for Oscar favorite The Post while Dunkirk, another awards season frontrunner, only picked up one nomination for its stunt team.

Armie Hammer and Michael Stuhlbarg are among the frontrunners to score twin supporting actor nominations at the Oscars for coming-of-age drama Call Me By Your Name—but they didn’t make the cut on Wednesday. And Freddie Highmore won a Critics’ Choice Awards nomination for Bates Motel and a nod at the Golden Globes for The Good Doctor, but failed to impress SAG voters sufficiently in either show.

The winners of the 24th annual SAG awards will be announced on Jan. 21 in Los Angeles, in a ceremony broadcast live on TNT and TBS. Last year, Fox’s biographical comedy-drama Hidden Figures landed the prize for outstanding cast in a motion picture, the SAG equivalent of an Academy Award for best picture.