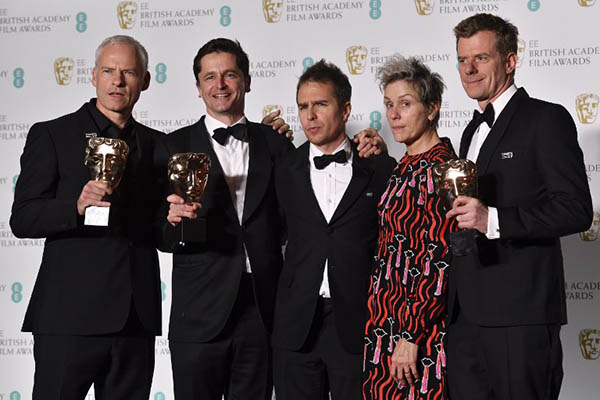 The Shape of Water—the most heavily nominated film of the night with 12 nods—came away with only three awards, including best director for Guillermo Del Toro, while Darkest Hour claimed two prizes, including for Gary Oldman as best actor.

With Hollywood still reeling from the fallout of the Harvey Weinstein scandal, the resulting anti-sexual harassment campaigns were reflected in the mood of the evening. “Our film is a hopeful one in lots of ways but it’s also an angry one,” Martin McDonagh, writer and director of Three Billboards, said in his acceptance speech. “And as we’ve seen this year, sometimes anger is the only way to get people to listen and to change, so we’re thrilled that Bafta has recognized this.”

Angelina Jolie, Jennifer Lawrence and Kristin Scott Thomas were among the stars who wore black. British royals avoid making overtly political statements or gestures, so there was little surprise when the Duchess of Cambridge chose to wear a dark green dress, by British designer Jenny Packham, as she accompanied husband Prince William, president of Bafta, to the ceremony.

Jane Lush, chair of Bafta, opened the evening soberly telling the star-studded audience it was important to acknowledge a “difficult” past year, and noted efforts to tackle gender inequality. “Brave revelations have followed brave revelations of bullying and sexual harassment, and which to all our shame has been hidden in plain sight for decades,” she said. “This is a moment in history, it should be a watershed, a catalyst for lasting change.”

Host Joanna Lumley, a British film and TV star, also praised the gender equality movement as a continuation of the work of the Suffragettes a century ago. She hailed the “determination to eradicate the abuse of women the world over” as she took to the stage.

Meanwhile in an open letter published Sunday before the awards, almost 200 British and Irish stars backed a new fund to help women facing sexual harassment and abuse at work. It echoes a similar initiative launched in Hollywood last month, and was kick-started with a £1 million donation from actress and activist Emma Watson.

Choices at the Baftas, which fall between the Globes and the Oscars, often mirror those of the American heavyweights. The Shape of Water, a story of love between a mute cleaning woman and a mystery merman-like creature, led the pack just as it has across the Atlantic, where it has topped the list of Oscar nominations with 13 nods, including for best picture.

Allison Janney won best supporting actress for her role as the mother of controversial figure skater Tonya Harding in biopic I, Tonya. “I loved doing this crazy part and finding her humanity, that’s what I try and do in all roles,” she said backstage.

Gary Oldman’s turn as Churchill in Darkest Hour has so far won him a Golden Globe, a Bafta and the chance of an Oscar on March 4. He paid tribute to the wartime British leader, saying: “In those dark, uncertain days in 1940, he held the line for honor, for integrity and freedom for his nation and the world, so I thank you, Sir Winston.”

Accepting her best actress accolade, McDormand, who chose not to wear black, quoted her on-screen character who has “a little trouble with compliance.”

“But I want you to know I stand in full solidarity with my sisters tonight in black,” she added.

Here is the complete list of winners from the British Academy of Film and Television Arts ceremony:

James Ivory (Call Me by Your Name)

Outstanding debut by a British writer, director or producer

I Am Not a Witch, Rungano Nyoni (Writer/Director), Emily Morgan (Producer)

Film not in the English language

I Am Not Your Negro

Alexandre Desplat (The Shape of Water)

The Posters Igniting a Feminist Firestorm in Pakistan