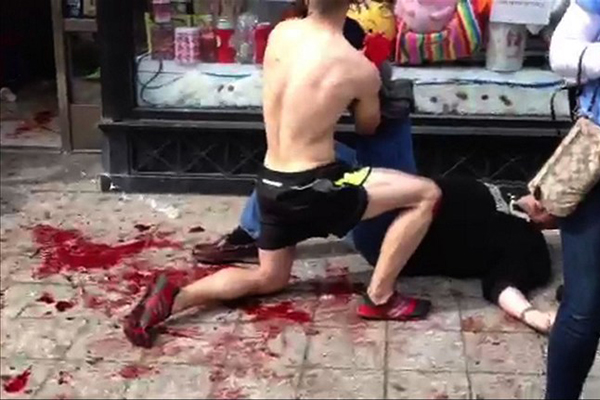 Attacks on the Boston Marathon put the United States on alert.

Two explosions struck one of America’s top sporting events on Monday, killing at least three and wounding more than 100 as the Boston Marathon erupted in a maelstrom of blood, screams, smoke, and panic.

As cities from New York to Los Angeles went on high alert, Americans with ever-vivid memories of the 9/11 suicide airliner attacks automatically wondered if the country had been hit again by terrorists.

President Barack Obama went on national television to say it was not yet clear who was behind the blasts. He said the perpetrators would pay. He did not utter the word “terror.”

“We still do not know who did this or why. And people shouldn’t jump to conclusions before we have all the facts,” Obama said. “But make no mistake, we will get to the bottom of this, and we will find out who did this, we’ll find out why they did this.”

A senior White House official, speaking on condition of anonymity, said later that “any event with multiple explosive devices—as this appears to be—is clearly an act of terror.”

At the blast scene, a horrific chorus of high-pitched wailing and screaming rang out as bewildered runners and spectators fled the carnage and debris.

News reports said one of the fatalities was an 8-year-old boy and that some of the injured lost limbs. One woman told CNN the blast was the loudest sound she had ever heard, and it made the ground shake.

The thunderous blasts struck near the finish line of the marathon, long after the winners had crossed. Competitors who were still running when the blasts rocked downtown Boston were diverted elsewhere. Some 27,000 people were entered to take part in the event.

Video footage on American TV showed the moment when the first blast apparently struck: the detonation came on the left side of the course, behind spectators and a row of colorful national flags showing how runners come from around the world to take part.

Security people in yellow jackets threw their hands to their ears as the blast took place and at least one runner was thrown to the ground as white smoke billowed upward. The already waving flags whipped violently with the shockwave of the explosion.

Grisly accounts abounded. “We saw people with their legs blown off,” Mark Hagopian, owner of the Charlesmark Hotel, said from the basement of a restaurant where he had sought shelter. “A person next to me had his legs blown off at the knee—he was still alive. It was bad, it was fast,” he said. “There was a gigantic explosion… we felt wind on our faces… Police were saying: ‘Get out, get out, leave, leave there may be more bombs.’”

Boston police chief, Ed Davis, raised the death toll from two to three at a late evening news conference at which other officials fended off a barrage of questions about the investigation into the explosions. FBI special agent Rick DesLauriers said: “It is a criminal investigation that is a potential terrorist investigation.”

More than 100 were injured, Massachusetts Gov. Deval Patrick said, without giving an exact figure. The Boston Globe said it was at least 125.

NBC News, citing officials, reported that police had found “multiple explosive devices” in Boston, raising the possibility of a coordinated attack. The twin explosions come more than a decade after nearly 3,000 people were killed in airplane strikes on New York, Washington, and Pennsylvania on Sept. 11, 2001. The sense of panic in the immediate aftermath of the blasts, and fear of more explosions, was so acute that Boston authorities urged people not to congregate in large crowds.

Sen. Dianne Feinstein, chair of the Senate Intelligence Committee, said she believed the blasts were in fact an attack but it was unclear if the perpetrators were homegrown or foreign. Asked if this was terrorism, she told reporters: “It looks that way.”

Security was stepped up in New York and Washington—both sites of 9/11 attacks—as well as in Los Angeles and San Francisco. In the Big Apple, police said they were boosting security at hotels and “other prominent locations in the city.”

The blasts in Boston rattled U.S. markets, sending the Dow and the S&P 500 down at the close.

The Boston Marathon is one of the biggest annual athletic events held in the United States. Racers must qualify to compete and there are tens of thousands of spectators. The race attracts world-class athletes, most of whom would have likely completed the race a couple of hours before the blasts. The video clip of the first blast showed the marathon time clock at 4:09:44. Hours later, the flag at the majestic white dome of the U.S. Capitol in Washington was lowered in honor of the blast victims.

Meanwhile, Pakistan issued a strong condemnation of the Boston attacks on Tuesday morning. “The government and the people of Pakistan are deeply shocked and saddened at the cowardly terrorist attacks in Boston during the marathon,” reads an official statement. “This despicable act has resulted in the loss of precious human lives, including children’s. Our condolences and prayers are with the victims and their families during this difficult time. The government of Pakistan condemns this heinous act of terrorism in the strongest possible terms and hopes that the perpetrators of this barbaric act will be brought to justice.”

How Safe Is America, Really?

30 died at a local wedding ceremony in Afghanistan as a result of a US drone attack.. Wake the f–k up world!

Really sad to hear the news. As a Muslim I believe all human beings need to have a safe life of their own but we are experiencing the same here in Pakistan for years…with the courtesy of external forces on daily basis….That needs to be stopped and condemned also.