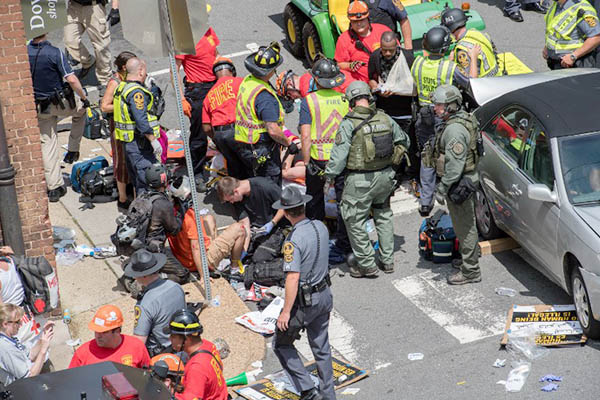 A white nationalist rally erupted into deadly violence on Saturday as a car plowed into a crowd while demonstrators and counter-protesters clashed, spurring U.S. President Donald Trump to condemn “hatred, bigotry and violence on many sides.”

But as the death toll linked to the rally rose to three—one in the car ramming and two state police officers in a helicopter crash outside Charlottesville—the president’s apparent refusal to criticize far-right hate groups sparked sharp criticism, even from members of his Republican Party.

Virginia Governor Terry McAuliffe had already declared a state of emergency when a sedan surged into a crowd of what witnesses said was counter-demonstrators in the picturesque university city of Charlottesville. A 20-year-old man was in custody over the attack. A 32-year-old woman was killed and 19 were hurt, police said, with injuries ranging from minor to life-threatening.

Another 16 people were treated for other injuries linked to the rally, including from “individual engagements,” Charlottesville police chief Al Thomas said.

The cause of the helicopter crash, which occurred in a nearby wooded area, was under investigation, Virginia State Police said. There was no indication of foul play. Lieutenant H. Jay Cullen and Trooper-Pilot Berke M.M. Bates had been assisting law enforcement efforts with the situation in Charlottesville, the agency said.

Hundreds had descended on Charlottesville either to march in or rail against a “Unite the Right Rally.” Unrest quickly flared even as riot police and national guard troops flooded the city’s downtown. White far-right supporters, some wearing hats with Trump’s “Make America Great Again” slogan and others in riot gear with shields and batons, faced off against counter-protestors as each side hurled projectiles before overwhelming the police positioned between them.

State police swooped in with tear gas as one counter-protestor who was repeatedly pummeled with sticks and a metal pole was left bleeding profusely.

Many of the far-right supporters brandished Confederate battle flags, considered a symbol of racism by many Americans, while others raised their arms in Nazi salutes. Anti-racism protesters waved flags from the Black Lives Matter movement, chanting slogans like “We say no to racist fear.”

Ambulances quickly arrived at the scene of the car ramming, which a witness told AFP was “intentional”—saying one girl got “tore up” after the car “backed up and they hit again.”

Trump, speaking from his golf course in Bedminster, New Jersey, said the hatred that erupted on Saturday has existed in America for “a long, long time.”

“We condemn in the strongest possible terms this egregious display of hatred, bigotry and violence on many sides, on many sides,” he said. “It has no place in America.”

But the president stopped short of condemning white nationalist and supremacist groups, which broadly supported Trump in last year’s election. He was quickly criticized by liberals, such as his 2016 election opponent Hillary Clinton, who did not name Trump but tweeted that “Every minute we allow this to persist through tacit encouragement or inaction is a disgrace, & corrosive to our values.”

A few prominent Republicans piled on and were more direct in their criticism.

“Very important for the nation to hear @potus describe events in #Charlottesville for what they are, a terror attack by #whitesupremacists,” Florida Senator Marco Rubio tweeted. Senator Orrin Hatch of Utah, the longest-serving Republican senator in U.S. history, tweeted that “We should call evil by its name. My brother didn’t give his life fighting Hitler for Nazi ideas to go unchallenged here at home.”

The planned rally never got officially underway, as McAuliffe declared a state of emergency saying authorities could not safeguard public safety. Authorities began clearing Emancipation Park after declaring those gathered there to be part of an “unlawful assembly.”

“I have a message to all the white supremacists and the Nazis who came in to Charlottesville today. Our message is plain and simple. Go home. You are not wanted in this great commonwealth,” McAuliffe said in an evening press conference.

Downtown Charlottesville was almost deserted by late afternoon—aside from a heavy security presence—but the city council authorized the police chief to impose a curfew, if necessary.

Saturday’s far-right rally follows a much smaller demonstration last month that saw a few dozen Ku Klux Klan-linked marchers gather to protest Charlottesville’s planned removal of a statue of General Robert E. Lee, who led Confederate forces in the U.S. Civil War. This time, the extreme right brought in big names of the “alt-right” movement—which has been emboldened, critics say, by Trump’s ascent to the White House—in a bid to attract more supporters.