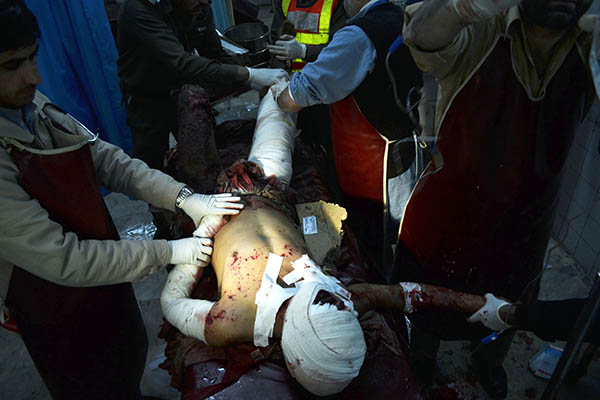 An explosion ripped through a rickshaw on Tuesday, killing at least three people and wounding four others in Peshawar, officials said.

The blast occurred at Chamkani, a suburb of Peshawar, the capital of Khyber-Pakhtunkhwa province, which borders Afghanistan and has been a target of Taliban suicide attacks and bombings. “At least three people were killed in an explosion in a rickshaw near a police check point,” said local police official Shaukat Ali.

One of the victims appeared to be of Uzbek origin, Ali said, referring to Central Asian militants among Taliban ranks. “According to bomb disposal squad’s initial report the explosion may have been caused by the explosives being transported or planted in the rickshaw,” he added. Ali said that two bodies were reduced to small pieces by the explosion.

Senior police official Rahim Shah confirmed the blast and casualties, and said that police were investigating.

Pakistan is on the frontlines of the U.S.-led war on Al Qaeda. Since July 2007, it has also been gripped by a local Taliban-led insurgency, concentrated largely in the northwest. It says more than 40,000 people have been killed in Pakistan by Taliban and Al Qaeda-led militants, who oppose Islamabad’s U.S. alliance.