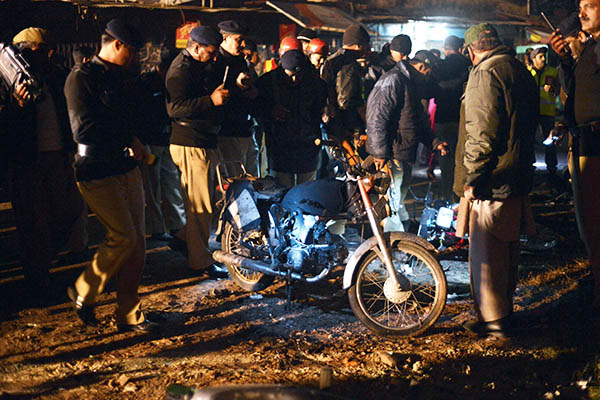 A suicide bomber struck outside a Shia mosque in Rawalpindi on Tuesday, killing at least three people and wounding 14 others in the latest sectarian attack to hit Pakistan.

The strike took place in the Gracy Lines neighborhood, as worshippers prayed inside the mosque, senior police official Akhtar Laleka said. “The bomber came on a motorcycle and detonated himself when intercepted by police at the first checkpoint.”

Hospital officials said at least three people were killed and 14 others were wounded. “We have three bodies and 14 wounded people at our hospital,” said Asif Qadir Mir, chief of the local government-run hospital.

There has been a rise in sectarian violence in Pakistan after several deadly clashes between Sunni and Shia Muslim groups in Rawalpindi last month.

Shia cleric Allama Nasir Abbas was killed late Sunday in Lahore after addressing a religious gathering. Earlier, on Nov. 19, gunmen killed a Shia university director along with his driver in Lahore, while another Shia leader and his guard were killed in Karachi in early December.