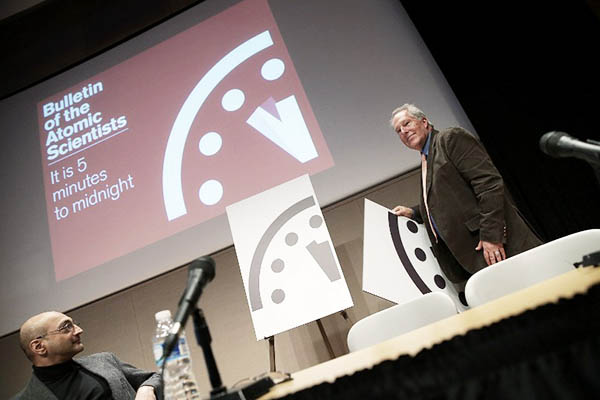 Climate change and the danger of nuclear war pose an ever-growing threat to civilization and are bringing the world closer to doomsday, a group of prominent scientists and Nobel laureates said on Thursday.

“It is now three minutes to midnight,” said Kennette Benedict, executive director of the Bulletin of the Atomic Scientists, as the group moved its symbolic “Doomsday Clock” two minutes forward.

“Today, unchecked climate change and a nuclear arms race resulting from modernization of huge arsenals pose extraordinary and undeniable threats to the continued existence of humanity,” Benedict said. “And world leaders have failed to act with the speed or on the scale required to protect citizens from potential catastrophe.”

The scientists called on people to demand action from their leaders to curb fossil fuel pollution and to stop developing ever more modern nuclear weapons that are endangering the planet. “We are not saying it is too late to take action, but the window for action is closing rapidly. The world needs to be awakened from its lethargy and start making changes,” Benedict said.

Such actions should cap greenhouse gas emissions at levels sufficient to keep average global temperature from rising more than 2 degrees Celsius above preindustrial levels, the group said. “Efforts at reducing global emissions of heat-trapping gases have so far been entirely insufficient,” said Richard Somerville, a member of the Science and Security Board, Bulletin of the Atomic Scientists, and a distinguished professor emeritus and research professor at Scripps Institution of Oceanography, University of California San Diego.

“Unless much greater emissions reductions occur very soon, the countries of the world will have emitted enough carbon dioxide and other greenhouse gases by the end of this century to profoundly transform the Earth’s climate,” he said, noting that 2014 was the hottest year on record and that the tipping point of ice loss in west Antarctica has been reached, meaning the melt is now unstoppable.

The climate changes that human are driving “will harm millions of people and will threaten many key ecological systems on which civilization relies,” he said.

The scientists also called for dramatically reduced spending on nuclear weapons modernization programs, and a renewed focus on disarmament. Benedict said that the world has about 16,300 nuclear weapons, which she described as “far too many.”

While the United States and Russia have far fewer weapons today than they did during the Cold War, the disarmament process has “ground to a halt,” said Sharon Squassoni, member, Science and Security Board, Bulletin of Atomic Scientists, and director of the Proliferation Prevention Program at the Center for Strategic and International Studies.

“Israel reportedly is also modernizing some of its undeclared nuclear forces and North Korea as we all know continues its nuclear program without any of the restraints previously applied under the Nuclear Non-Proliferation Treaty,” she told reporters. She said that any post-nuclear optimism that arose at the end of Cold War “has essentially evaporated.”