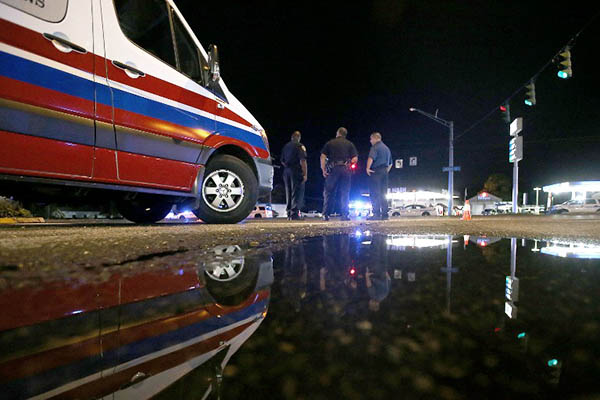 Security officials shot dead by black veteran in another sign of worsening race relations in the U.S.

A black veteran shot three police officers dead on Sunday in the Louisiana capital of Baton Rouge, in a bloody act reminiscent of recent slayings in Dallas to avenge African-Americans killed by law enforcement.

The shooting, which also wounded three other officers, took place in a city scarred by racial tensions and protests against police brutality since the July 5 death of Alton Sterling, a black man shot at point-blank range by white police.

Louisiana State Police Superintendent Colonel Mike Edmonson told reporters the gunman behind the shooting—widely identified by U.S. media as Gavin Long, 29—was killed and there are no suspects at large. The motive was not immediately clear.

A troubling picture emerged of the shooter, a former Marine whose Iraq tour lasted from June 2008 to January 2009. Long legally changed his name last year to Cosmo Ausar Setepenra, claiming to be a member of the Washitaw Nation, a group of African-Americans claiming to be a Native American nation in the United States.

Setepenra’s Twitter feed, which was filled with posts targeting white people, said he had traveled to Dallas, and he posted videos of himself traveling there. “Violence is not THE answer (its a answer), but at what point do you stand up so that your people don’t become the Native Americans…EXTINCT?” he wrote in a July 13 post.

But one of the officers killed by Long—Montrell Jackson—was black. The other two were identified by U.S. media as Matthew Gerald and Brad Garafola.

One of the wounded officers “is in critical condition fighting for his life as we speak,” Edmonson said. The other two officers were in stable condition. “To me, this is not so much about gun control as it is about what’s in men’s hearts,” said Edmonson, who like some of his colleagues who spoke in the press conference, was clearly shaken. “And until we come together as a nation, as a people, to heal as a people, if we don’t do that and this madness continues, we will surely perish as a people.”

The shooting took place along a highway near police headquarters around 8:40 a.m., after officers responded to a call about a man carrying a rifle. The suspect was dressed all in black and, some reports said, wore a mask. A witness told local media the gunman carried what appeared to be an AR-15 assault-style rifle.

On July 7 a gunman ambushed police officers in Dallas, Texas, killing five, during a demonstration triggered by Sterling’s death at the hands of police, as well as that of another African-American man in Minnesota whose dying moments were captured in video footage that went viral online.

President Barack Obama condemned the “cowardly” Baton Rouge shooting and demanded an end to such violence. “It is so important that everyone… right now focus on words and actions that can unite this country rather than divide it further,” Obama said. “We don’t need inflammatory rhetoric. We don’t need careless accusations thrown around to score political points or to advance an agenda. We need to temper our words and open our hearts, all of us.”

Obama, the first black U.S. president, has repeatedly called for racial unity. “We as a nation have to be loud and clear that nothing justifies violence against law enforcement,” Obama told reporters at the White House. “This has happened far too often.”

Donald Trump, the presumptive Republican presidential nominee, expressed grief in a Facebook post. “How many law enforcement and people have to die because of a lack of leadership in our country? We demand law and order,” he wrote.

Last week, police arrested more than 100 protesters taking part in a demonstration against police brutality in Baton Rouge under the banner of the Black Lives Matter movement.

Sterling’s aunt Veda Washington-Abusaleh made a tearful plea for an end to the violence. “We don’t want no more bloodshed. Leave. Go home. Go wherever you come from. This is our house. You can’t come in our house killing us,” she said in an emotional interview with local television. “No justice! No peace! That’s what we’re calling for. Stop this killing!”