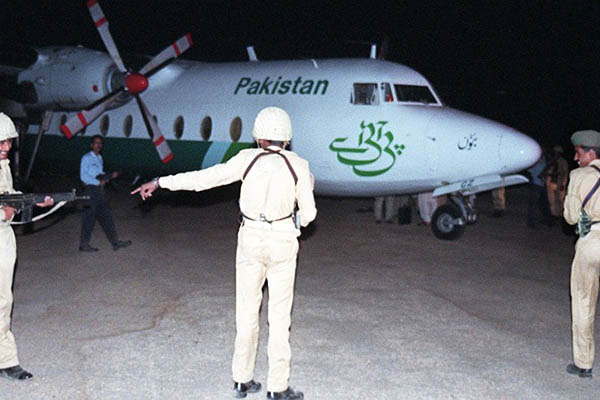 A fourth man executed for murdering a three-year-old child in 2003.

Three Baloch separatists were hanged on Thursday after being convicted of hijacking a plane in 1998, which they attempted to fly to India to disrupt Islamabad’s first nuclear tests, officials said.

The executions were carried out on the 17th anniversary of the tests, which made Pakistan the world’s seventh nuclear-armed power.

Two of the men, Shahsawar Baloch and Sabir Baloch were hanged in Hyderabad prison in Sindh province while the third, Shabir Rind, was hanged in Karachi, officials at both the prisons told AFP.

The trio was sentenced to death for hijacking a Pakistan International Airlines aircraft with 30 passengers on board on May 24, 1998, four days before the country’s first nuclear test. The flight took off from the port town of Gawadar in Balochistan and was set to land in Karachi when the men stormed the cockpit and tried to force the pilot to fly to India. But he instead flew to Hyderabad city, tricking the hijackers into thinking that they were in India.

The next day Pakistan Army commandoes overpowered all the three hijackers in a night operation.

Officials said the executed hijackers were Baloch nationalists who were demanding greater autonomy for their resource-rich but impoverished province.

Separately on Thursday, a fourth hanging was also carried out, in Karachi jail, the prison official said. The executed man, Mahmood Ali, had been awarded the death sentence for murdering a three-year-old child in 2003.

A moratorium on the death penalty had been in force in Pakistan since 2008, but executions resumed last December after Taliban militants gunned down 154 people, most of them children, at a school in the restive northwest. The moratorium was initially lifted only for those convicted of terrorism offences, but in March was extended to cover all capital offences.

Before Thursday’s executions, the number of people executed since the moratorium was lifted stood at 128.