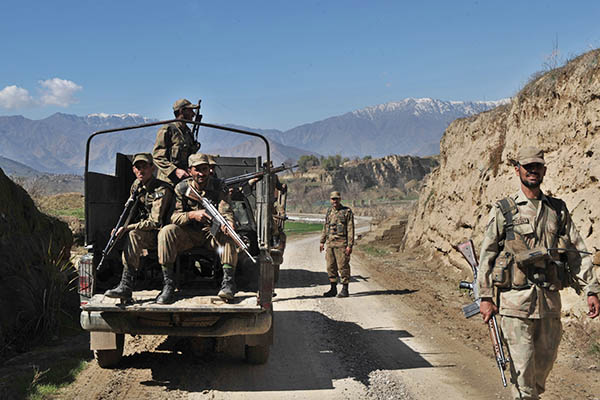 Militants killed at least three Pakistani soldiers in an attack early Saturday on a border post in the Bajaur district, while airstrikes against rebels left 13 insurgents dead, officials said.

Around two-dozen militants armed with sophisticated weapons crossed from the Afghan province of Kunar to launch the pre-dawn ambush in Bajaur, officials said. “Militants from across the border ambushed a checkpost. Two security personnel and an officer embraced martyrdom in the attack,” said a security official in Bajaur.

A senior government official said the militants were forced to flee after troops retaliated. No group has yet claimed responsibility but both officials said Tehreek-e-Taliban Pakistan (TTP) militants were involved in the attack.

“It might be in retaliation for the Pakistan military offensive in North Waziristan,” said the government official.

A senior military official in Peshawar confirmed the attack and death toll, adding that the troops were killed when a rocket hit a vehicle near the checkpost. “Two soldiers were wounded and taken to the main hospital in Bajaur,” he said.

Mullah Fazlullah, current head of the TTP, which rose up against the Pakistani state in 2007, is believed to be possibly hiding across the border in Kunar.

Pakistan’s armed forces have been waging a massive offensive in North Waziristan, a tribal district south of Bajaur, for the past three-and-a-half weeks to eradicate militants and their hideouts.

A military statement on Saturday said fighter jets bombed insurgent hideouts in the town of Mir Ali after militants fired rockets at a security checkpost, “killing at least 13 militants and destroying seven hideouts.”

“A huge cache of arms and ammunition was also destroyed. Most of the terrorists killed in strikes are foreigners,” it added. It said two explosives-laden vehicles were destroyed by airstrikes while two suicide bombers blew themselves up when encircled.

More than 400 militants and 20 soldiers have been killed in the offensive so far, according to the military. The area is off-limits to journalists and the number and identity of the dead is impossible to verify.