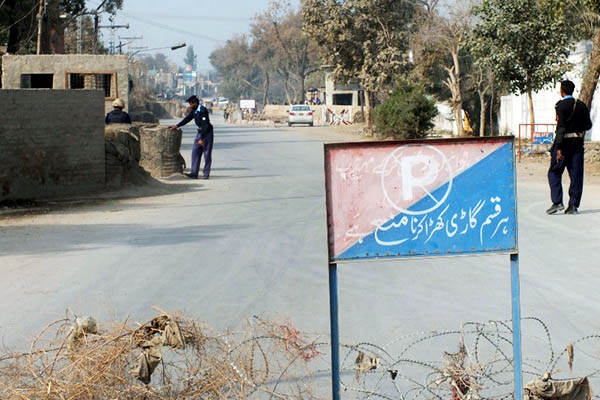 Police stand guard at a checkpost in Bannu. Karim Ullah—AFP

Another two wounded during patrol to inspect site of proposed military checkpost.

At least three soldiers were killed and another two wounded in a roadside bomb blast in northwest Pakistan on Thursday, officials said.

The incident took place near Miranshah, the capital of North Waziristan. “A patrolling team was inspecting the Bannu-Miransah road to build a military checkpost when they stepped on an improvised explosive device (IED),” said a senior security official based in Peshawar. He said the incident occurred around 26 kilometers east of Miranshah.

“It’s a standard operating procedure that a patrolling team on foot inspects the area before setting up a temporary checkpoint,” he said.

The military confirmed the incident through a spokesman. “Two soldiers embraced martyrdom and three were injured early in morning in two IED blasts planted by terrorists on roadside near Nosher Fort, bordering North Waziristan,” a statement said. Another issued a short time later added one of the wounded subsequently died.

Since the TTP rose up against the Pakistani state in 2007, more than 6,800 people have been killed in bomb and gun attacks around Pakistan, according to an AFP tally.