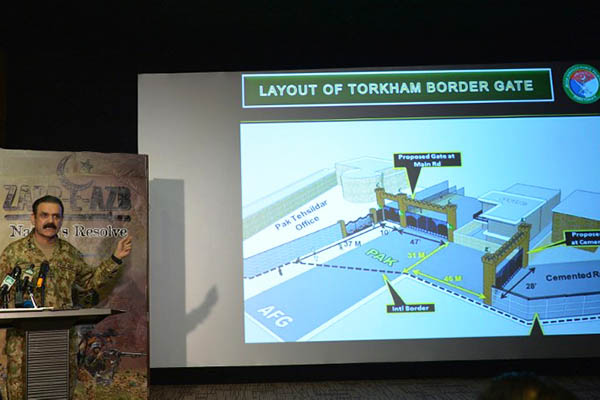 It was difficult to decipher the mysteries of Afghanistan’s intent when its security forces started firing at Pakistan on the night of June 13. The shooting erupted after Pakistan started constructing a border post 37 meters inside its territory at Torkham to enhance security. The Afghan firing killed a Pakistan Army officer, Maj. Ali Jawad. As his last rites proceeded, both sides agreed to a ceasefire. But when construction commenced again, so did the firing—despite the Afghan ambassador’s assurances.

It is clear Kabul is reasserting its old denial of the international border between Pakistan and Afghanistan, the Durand Line, drawn in 1893 by the British and Afghanistan’s then-king. Demarcation of the border on the ground began in April 1894 and was completed in May 1896, with only two sections of “west Khyber” remaining un-surveyed. Later in history, Afghanistan decided to dispute the Durand Line, calling it the result of a treaty arrived at “under duress.” It even cast a negative vote at the U.N. at the time of Pakistan’s admission to it. Today, official maps all over the world recognize the Durand Line as the legal international border.

Despite the fact that the Durand Line was reaffirmed in 1919 by Afghanistan with the promise of demarcation of the “west Khyber” area, Afghanistan has never formally accepted the border—not even when the “friendly” Taliban were ruling Kabul.

Pakistan has wisely abstained from an aggressive response to this border post incident. Torkham is an important point on the Durand Line dividing Pakhtun tribes that cross it every day for livelihood. There is a lot of trading on this important Torkham-Jalalabad road, and the new gate would have facilitated identity checking and customs duties in addition to beefing up security against the presence of the Islamic State militant group in Jalalabad.

Afghanistan forgets that it was Pakistan that rebuilt the dangerous Jalalabad-Kabul road and has projects worth $500 million in Afghanistan covering education, health and infrastructure, apart from 3,000 scholarships for Afghan students in different Pakistani universities. Despite the “modern” face of Afghanistan in President Ashraf Ghani, a tribal mindset inveterately hostile to facts remains firmly intact in our troubled neighboring country.