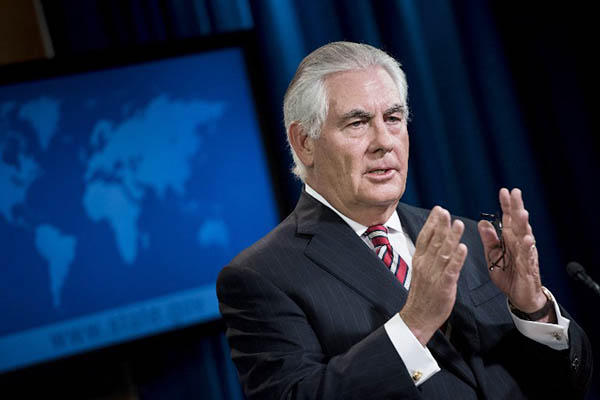 The United States’ top diplomat defended his country’s foreign policy record on Wednesday, saying progress had been made in the last year to rein in North Korea’s nuclear ambitions and to counter the “immense challenges” posed by Russia, China and Iran.

In an opinion piece in the New York Times, Secretary of State Rex Tillerson said some 90 percent of Pyongyang’s export earnings had been cut off by a series of international sanctions after the Trump administration “abandoned the failed policy of strategic patience.”

Washington wants North Korea to abandon its nuclear program and has spearheaded three rounds of U.N. sanctions against the isolated regime, restricting crucial exports of coal, iron, seafood and textiles from the cash-starved state.

Pyongyang has hit out at those sanctions, calling the latest round “an act of war,” and has vowed to never give up its nuclear program.

In his piece Tillerson said “a door to dialogue remains open” for Pyongyang but warned “until denuclearization occurs, the pressure will continue.” At the same time he called on China—Pyongyang’s only major ally—to “do more” to pressure North Korea.

Trump’s administration has been dogged by allegations his campaign team colluded with Russia to help him win last year’s election.

Addressing relations with Moscow, Tillerson said the Trump administration had “no illusions about the regime we are dealing with” and that they were “on guard against Russian aggression.” But he added that Washington needed to “recognize the need to work with Russia where mutual interests intersect” citing Syria civil war where the two countries have backed opposing sides but pushed for peace talks.

On Iran he struck a less conciliatory tone. “The flawed nuclear deal is no longer the focal point of our policy toward Iran,” he warned. “We are now confronting the totality of Iranian threats.”

He also defended his cuts to the State Department and USAID budget, saying they were designed to “address root problems that lead to inefficiencies and frustrations.”