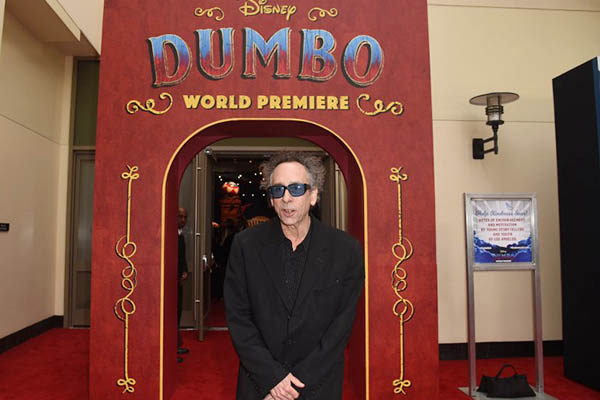 He has never liked the Big Top, mainly due to the caged animals and freaky clowns, but for legendary director Tim Burton there is no denying the romance of running away to join the circus. And even more so if the adventure involves a flying elephant, says the 61-year-old Californian, who is hitting red carpets with his 26th feature, a remake of the 1941 Disney classic Dumbo.

“The thing I liked about Dumbo was just the idea—the image of a flying elephant and a misfit—and all that sort of stuff is very appealing to me,” he said.

The visionary behind a slew of hits spanning four decades, from Gothic animation to screwball comedy, Burton recalls being something of a misfit himself—the other kids at school called him “weirdo.” But like Dumbo, Burton’s Achilles heel was his superpower. The outsider persona gave him space to grow into one of Hollywood’s most sought-after creatives when he might just have been part of the crowd.

The theme of alienation or disability as a source of strength runs through much of his oeuvre, and his most recognizable characters, from Beetlejuice and Batman at the start of his career through Edward Scissorhands, Ed Wood and Sweeny Todd, have been outsiders. “You can have a misfit perceived as something and they use that as a positive thing,” says Burton, pointing to Dumbo’s big, floppy ears—a source of shame that becomes an advantage.

The live action update follows the 1941 animated Disney fable in some aspects—as in the original, Burton’s pachyderm protagonist is mute—but the human characters get a bigger role. And while Bill Condon’s 2017 Beauty and the Beast hewed close to the 1991 animated version—notwithstanding some extraneous backstory—Dumbo is a very different creature from its wartime progenitor.

“I felt liberated that I didn’t have to follow too much, because it’s not really a story, it’s a very simple fable,” Burton told AFP.

Among the new stuff, the movie manages to retain some of the elements that gave the original its charm, such as the heartbreaking scene in which Dumbo visits his caged mother.

In this telling of Dumbo, which hits U.S. theaters on March 29, the elephant calf is born in the circus of ringmaster Max Medici (Danny DeVito) and placed in the custody of Holt Farrier (Colin Farrell), a World War I veteran and widower who has lost an arm in battle. Farrier does not get along with his kids, who discover what Dumbo can do when he holds a feather in his trunk.

Filmed at Pinewood Studios, the iconic home of James Bond and Star Wars near London, the production’s main hurdle was that its protagonist—a CGI animal added in post-production—was never on set.

Burton, a cult filmmaker of Gothic sensibilities whose mainstream plaudits have included a Golden Globe and two Oscar nominations, says he didn’t see the final cut until just weeks ago. “We had a stuffed animal. We had a guy, Ed, who learned lots of elephant moves so he was very valuable because he made it more interactive,” said Burton.

The filmmaker was never a fan of the circus as a child but says he enjoys the fantasy of an itinerant life as a traveling show runaway. “I like the idea, that phrase you used to hear: ‘I’m going to run away and join the circus.’ Right? Not literally, but the idea—like you’re going to go join a bunch of other misfits from around the world … I always liked that concept,” he muses.

With his latest project, Burton comes full circle, bookending a career that started with a job at Disney as an animator on The Fox and the Hound (1981). But the relationship did not last long: the Mouse House sacked its apprentice for wasting time and money on the short film Frankenweenie, which was considered too dark for children.

“I didn’t have the patience to be an animator,” says Burton. Disney, he says, has hired and fired him more times than he can count over the years. “So it’s like a family history in a weird way,” he said. “It has its ups and downs, like any family.”

Burton says it is Disney’s mix of monsters and magic—its refusal to shy away from difficult and sometimes taboo themes like death and divorce—that makes it special. The studio, he says, doesn’t patronize its young audiences, in an age when children are often assumed to be too fragile to be confronted with life’s harsher realities.

He recalls seeing a screening of 1940’s Pinocchio—a family movie that doesn’t pull its punches—and being surprised by the tears and shocked reaction of the modern audience to the puppet’s death. “The world changed. The world has gotten worse, but people are getting more protective. I don’t quite understand myself,” he said.