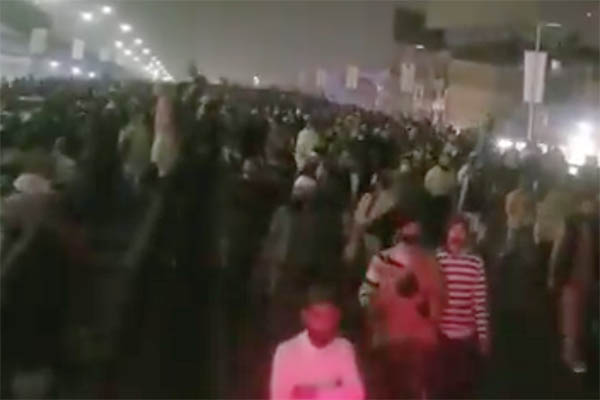 Protesters have claimed their sit-in will continue until Islamabad expels French ambassador, ends all ties with France

Rawalpindi took on the appearance of a battleground on Sunday, as supporters of the Tehreek-e-Labaik Pakistan (TLP) clashed with police on the call of chief Khadim Hussain Rizvi before setting up camp at the Faizabad Interchange—the site of their 2017 sit-in.

Thousands of TLP supporters are currently camped out at Faizabad, causing road closures and traffic snarls. “Islamabad Expressway from Zero Point till Khanna Bridge will stay sealed,” announced Islamabad Deputy Commissioner Hamza Shafqat on Twitter. “Everyone is requested to please use alternate routes. Apologies for inconvenience. We are trying our best to clear the route,” he added.

The protesters are demanding that Pakistan declare the French ambassador “persona non grata” and evict him from the country. They have said that they would not end their protest until Pakistan has cut all diplomatic, trade, and economic ties with France.

Last month, French President Emmanuel Macron referred to Islam as a religion “in crisis,” accused Muslims in the country of being “separatists,” and vowed to continue encouraging the creation and publication of blasphemous caricatures depicting Islam’s Prophet. His statement followed the beheading of a teacher who had displayed the blasphemous caricatures during a class on free speech.

Pakistan’s Parliament, in response, approved resolutions condemning Islamophobia, while Prime Minister Imran Khan has written to leaders of Muslim states urging them to inform the West that free speech does not grant the right to attack religious sentiments.

On Sunday, riot police used teargas in a bid to disperse the TLP protesters, and also arrested at least 200. The violent protest witnessed several clashes, which resulted in dozens of police personnel, and several TLP activists, being injured and shifted to hospital.

The district administration tried to stop the protest by sealing 24 entry points to Rawalpindi with shipping containers, but was unsuccessful in preventing the crowd from converging on the city. Similarly, around 16 entry points to Islamabad were also blocked. Mobile phone services were also blocked throughout the day—with parts of Rawalpindi and Islamabad reporting that services have yet to be restored today (Monday).