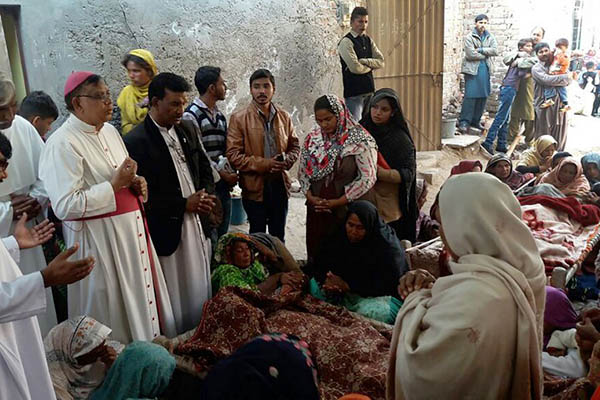 Police say two of four suspects accused of preparing lethal mix are among the dead, while other two have been charged with murder.

Thirty-nine people have now died after drinking homemade liquor mixed with aftershave on Christmas Eve in central Pakistan, officials said on Friday, including two out of the four suspects accused of creating the toxic brew.

Police and hospital officials added 23 of the 121 people sickened in the incident, which happened in the town of Toba Tek Singh, are still in hospital. “So far 39 people have died after consuming toxic liquor,” said senior police official Atif Imran, who is investigating the case. Most of the dead were Christians.

Imran added that two of the four suspects accused of preparing the mix had died while the other two were had been charged with murder and terrorism related offences.

Though legal breweries exist in Pakistan, alcohol sales and consumption are banned for Muslims and tightly regulated for minorities and foreigners. While wealthy Pakistanis buy foreign alcohol on the black market at heavily inflated prices, the poor often resort to home brews that can contain methanol, commonly used in anti-freeze and fuel.

Eleven Christians died in October after consuming toxic liquor at a party in Punjab province. In October 2014, 29 drinkers were killed after consuming methanol-tainted liquor over the Eid holidays.