Home Lightbox Tomorrow We Will Be Killed

Tomorrow We Will Be Killed 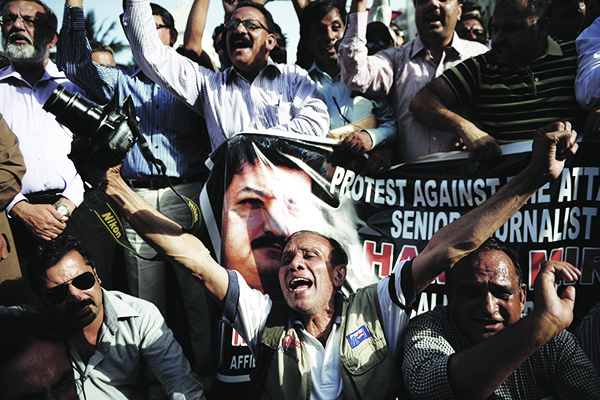 Raza Rumi’s vehicle was attacked by gunmen in Lahore on March 28. The talk-show host of Express News was fortunate to survive that hit; his young driver, Mustafa, was not so lucky. Less than a month later, on April 19, Hamid Mir’s car was shot at and chased by gunmen in Karachi. The Geo News anchor took up to six bullets. He is expected to make a full recovery.

The Rumi attack was condemned, but only by Pakistan’s English-speaking community. Outside it, within the larger world of the vernacular press, the Lashkar-e-Jhangvi hit barely made a ripple. The attack on Mir, who also writes for the Urdu-language Jang, has made waves. What makes an attack on one journalist more newsworthy or condemnable than that on another?

I first met Rumi several years ago when he was working on the Access to Justice Project at the Asian Development Bank. He then moved to Manila for a few years before giving up the cushy life of an international bureaucrat and returning to the maelstrom of Pakistan. Having taken that leap of faith, he then took another. He left government service for the more hazardous charms of the private sector, carving out a unique niche for himself mixing political analysis with journalism, travelogues, and cultural commentary.

Pakistan’s current numbness to the gradual decimation of its more educated citizenry (along with the Shia, the Hazara, the Ahmadis, Christians, and the Malik of the tribal areas) has been so often bemoaned that the Martin Niemöller poem about how the Nazis gradually silenced all dissent in pre-World War II Germany, “First they came for the Socialists,” is familiar to most readers of the English press. Pakistan’s ruinous situation can also be summed up with the title of Philip Gourevitch’s 1998 book about the Rwandan genocide: We Wish to Inform You That Tomorrow We Will Be Killed with Our Families.

Is it fair to compare Pakistan’s present-day plight to Tutsis being hacked to bits or the Holocaust? Don’t Pakistan’s vibrant and snarky social media posts and blogs and dozens of cable news channels keep state (and nonstate) suppression of opinion at bay? The comparisons aren’t about the numbers. Rather, they refer to the depth of a criminal public indifference.

Rumi was—and it galls me to use the past tense here—one of the few bright lights in a media landscape populated by shrieking harridans and hypocritical blowhards. He is educated, polite, decent, and intelligent. And now, he is no longer on our television screens.

The attack on Rumi led to an anguished editorial from The Express Tribune, affiliated with Express News, where Rumi worked, asking whether the paper should stop telling the truth because it was putting the lives of its staff in danger. The editorial also contained a veiled reference to an earlier column by me about the need for full disclosure after the media group was forced by violence to tone down its anti-Taliban coverage. I have nothing but respect for the people at Express and those who continue to put their lives on the line. My only point was that the Tribune and its affiliated entities are indeed in the business of telling the truth and that is an awesome responsibility, not one which can be shaded or slighted. My further point now is that the Tribune must now, more than ever, continue telling the truth. Leaving aside issues of “high journalistic ethics,” the Tribune cannot survive otherwise.

Since it launched in 2010, the Tribune has been host to a number of writers who have argued, again and again, that there is no compromise possible with the Taliban and their ilk, that we are in an ideological war, and that only one side can prevail. The Tribune should heed this advice. A newspaper needs some degree of swagger to protect itself. If it accepts publicly that it can be bullied, then it will continue to be bullied. And if it continues to be bullied, then it stops being respected as a newspaper—and becomes nothing. I do not mean to pretend that these are easy questions. It may be that the liberals of Pakistan are like canaries in a coalmine, succumbing first so that others may survive. It may be that a productive demise is the best we can hope for.

Why this despondency? It is difficult to see what will bring this comatose nation to life. Some days ago, Pakistan Tehreek-e-Insaf chief Imran Khan said that the Taliban do not want to impose Shariah at the barrel of a gun. As statements go, this one was particularly stupid. Over the years, the Taliban have made no bones about their desire to impose Shariah and they have certainly had no compunction about their use of force. In any event, a few days later, the Taliban made an express statement that they did indeed want to impose Shariah through force. In a sentient nation, a blunder of such epic proportions by the leader of the third largest political party in the National Assembly would lead to that leader being laughed out of town (or at least Parliament). As it is, nothing of the sort happened. There was the odd joking tweet, but for the most part the normal reaction was, “Ho hum, it’s just Khan being Khan.”

Pakistan has lost some 50,000 citizens to terrorism. The people killing us repeatedly tell us that they do not respect our Constitution and our laws. They have no compunction about their use of force. They keep repeating that they will use more force and more terror to get us to submit. And one of our top political leaders insists on ignoring their words because he somehow knows better than anyone else what exists in the heart of a Pakhtun. The entire basis for this claim is Khan’s ethnic heritage and a two-week trip to the federally-administered tribal areas some 20 years ago. And yet, to point this out is to ensure condemnation by an ill-mannered horde of commentators.

God is said to help those who help themselves. Pakistan, at present, does not want to help itself.

Very well written, but I strongly disagree that Pakistan’s ‘liberal elite’ (including those in the media) are the canaries in the coalmine when it comes to terrorism – that just reeks of self-importance. The overwhelming majority liberal elite are well-off and comfortable enough in their lives not to be bothered by the routine struggles of the common man (extremism being a major contributing factor to that).

The real canaries are the Ahmadis, Shias, Christians and assorted sects who are being slaughtered for the sin of being born in the wrong sect. The next ones up on the chopping block will be working class Sunnis who will either be coerced into adhering to the hardliners’ strain of faith (which will eventually become a homogenous, mainstream brand of faith) or risk the same tragic fate for resisting it. Despite attacks on journalists and liberal-minded publishing houses, in terms of actual physical harm the vast majority of liberals are pretty far below the radar, which in turn makes them even more responsible for fighting in this war of ideology, not force.