Home Lightbox Too Pea-brained for Peace

Too Pea-brained for Peace 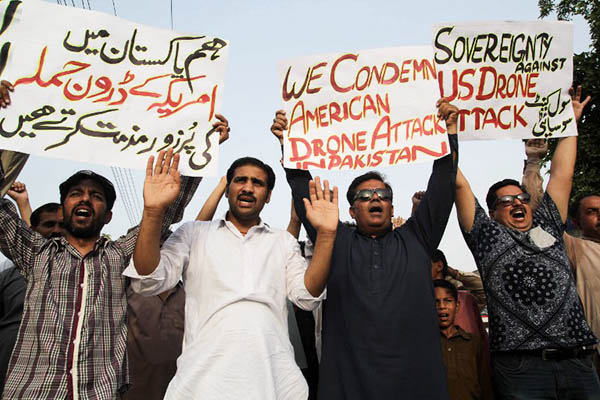 More isolation is coming our way.

The Americans have killed Mullah Mansour, the Afghan Taliban chief, inside Pakistan. The drone that killed him has killed the peace talks between the Taliban on the one hand and three “interested” countries—the U.S., China, Pakistan—on the other. The gangs of Afghan Taliban will splinter further but carry on their marauding jihad in Afghanistan as separate armies; and some might join the Islamic State militant group whose agents have already reached Karachi.

Pakistan has protested the intrusive attack as a violation of its airspace, which is risible as Pakistan equally denies presence of foreign terrorists on its territory. Mullah Omar was “denied” and his Afghan Shura in Quetta, which the world thought was malleable in the hands of Pakistan, was never acknowledged. Osama bin Laden lived in Abbottabad for three years before the Americans killed him and took his body away. Now the peace talks are gone and they were important for Pakistan because China, the largest investor in Afghanistan, was in the quadrilateral dialogue.

It suited Mansour to say no to peace talks because he couldn’t rally the Taliban factions around him. Now that the Americans have killed him, the next leader Sirajuddin Haqqani will be worse because his Haqqani network on Pakistani soil has already gummed up U.S.-Pakistan relations. Kabul and Islamabad will have to deal with the coming threat: they both have assured each other that their territory won’t be allowed (sic) to be used for cross-border terrorism.

The only way out is for the two dead-duck victims—Afghanistan and Pakistan—to come together and help each other out. But Interior Minister Chaudhry Nisar Ali Khan in Islamabad is probably not aware of this need as he has protested the Pakistan Army’s recent handover of the border checkpost of Angoor Adda to the Afghan Army. The Pakistan Army had actually done it “to strengthen brotherly relations between Pakistan and Afghanistan and with a strategic intent to improve border management.”

This means that another quarrel is on, this time this side of the Durand Line. The Army answered the interior minister: “It was reiterated during the process, that all border-related issues will be amicably resolved through mutual consultations subsequently.” The Foreign Office and the Interior Ministry are busy protesting against they don’t know what, unaware that the coming days will increase Pakistan’s isolation in the region and the world, as politicians destabilize the country trying to unseat a government halfway through its tenure.

Ahmad alzawhari,Dawood ibrahim .who next?.