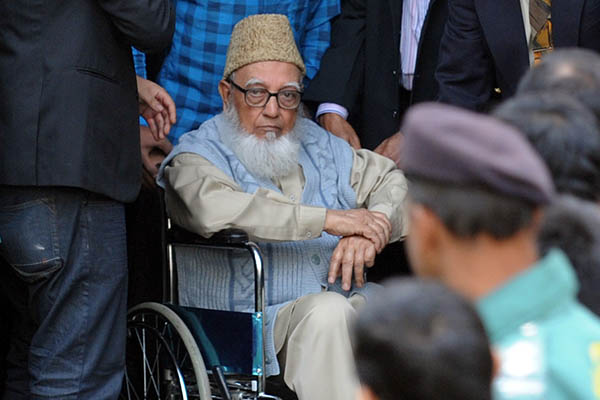 Ghulam Azam led the Jamaat-e-Islami in Bangladesh during 1971 civil war.

A special Bangladeshi court on Monday sentenced an elderly top Islamist to 90 years in prison for masterminding atrocities during the 1971 war of independence against Pakistan.

Ghulam Azam, compared by prosecutors to Hitler, was found guilty of all five charges of planning, conspiracy, incitement, complicity, and murder and torture during the war, which the government says killed three million people. However, 90-year-old Azam, the wartime head of the country’s largest Islamic party, Jamaat-e-Islami, and now its spiritual leader, was spared the death penalty because of his age and health, and was instead sentenced to nine decades in prison, an official said.

“He was found guilty beyond reasonable doubt in all five charges. The tribunal observed that he deserved the death penalty,” junior Attorney-General M. K. Rahman said. “But because of his old age and health complications, he was sentenced separately in the five charges. In all he has been sentenced to 90 years in prison,” the lawyer said outside the court. “Some kind of justice is done, but we are not happy.”

Street violence erupted across Bangladesh ahead of the judgment, handed down by the controversial International Crimes Tribunal. Supporters clashed with police, who fired rubber bullets at Jamaat activists armed with homemade bombs.

Jamaat, the country’s largest Islamic party and a key member of the opposition, called a nationwide strike on Monday to protest the verdict, saying the war crimes trials are aimed at eliminating its leaders.

Prosecutors had sought the death penalty for Azam, describing him as a “lighthouse” that guided all war criminals, and the “architect” of the militias that committed many of the 1971 atrocities. When India intervened at the end of the nine-month war and it became clear Pakistan was losing, the militias killed dozens of professors, playwrights, filmmakers, doctors, and journalists. Azam was described as the “mastermind” of the massacres of the intellectuals. Many of their bodies were found a few days after the war at a marsh outside the capital, blindfolded and with their hands tied behind their backs.

Azam is the fifth person convicted by the International Crimes Tribunal. Three Islamists have been sentenced to death and one was given life imprisonment. Previous verdicts by the tribunal have sparked widespread and deadly violence on the streets of a country that has a 90 percent Muslim population.

Azam’s lawyer Tajul Islam said the charges were based on newspaper reports of speeches Azam gave during the war, which led to the creation of Bangladesh. “The prosecution has completely failed to prove any of the charges,” he said before the verdict.

Journalists were among up to a dozen people injured on Monday when they were caught in the clashes ahead of the verdict in Dhalpur district of the capital Dhaka, local police chief Rafiqul Islam said. “One of the journalists was hit by [shrapnel],” he said, adding the protesters hurled at least five small homemade bombs at police. Police also fired rubber bullets at protesters in the cities of Bogra, Comilla, and Rajshahi after activists went on the rampage, attacking and torching dozens of vehicles, police officials said.

The opposition has criticized the cases as politically motivated and aimed at settling old scores rather than meting out justice.

Unlike other war crimes courts, the Bangladesh tribunal is not endorsed by the United Nations. The New York-based Human Rights Watch group has said its procedures fall short of international standards. The government maintains the trials are needed to heal the wounds of the 1971 war in which it says three million died. Independent estimates put the death toll at between 300,000 and 500,000.