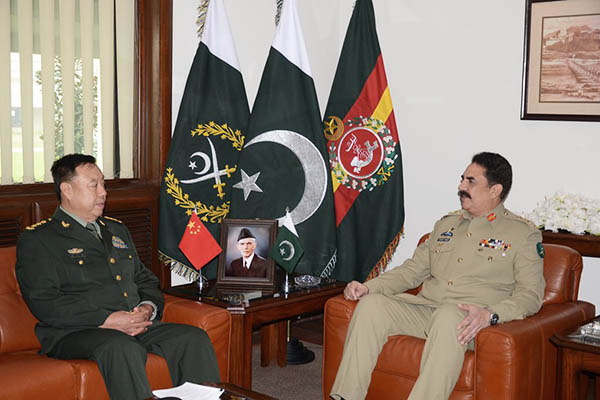 Beijing will back Islamabad to ensure the security of a new special economic corridor providing access to the port of Gwadar that aims to create direct links between China and the Arabian Sea, a top Chinese general has pledged.

The China-Pakistan Economic Corridor is an ambitious $46 billion project giving Beijing greater access to the Middle East, Africa and Europe through Pakistan, via a new highway to Gwadar port on the Arabian Sea. Fan’s visit, the first by a Chinese general of his seniority in 11 years, came two days after Pakistan handed hundreds of hectares of land over to China for development of a free trade zone in Gwadar as part of the project.

The development is part of China’s ambition to expand its trade and transport footprint across Central and South Asia while countering U.S. and Indian influence. India has expressed wariness about the project in the past, though analysts told AFP recently that concerns would only arise if there are “defense related matters.”

Xinjiang—the homeland of China’s 10 million Uighurs, a mostly Muslim minority—is sporadically hit by deadly violence. Beijing has claimed that ETIM militants are hiding in Pakistan, a claim that has been supported by local security sources. “China values the efforts of Pakistan Army in fighting ETIM,” Fan said, adding that China and Pakistan are “best iron brothers, good friends and strategic partners.”

Fan also met with Prime Minister Nawaz Sharif in Islamabad on Thursday, with Sharif lauding Islamabad’s friendship with Beijing as a “cornerstone” of its foreign policy.

The government of Balochistan handed over about 280 hectares of a 923-hectare swathe of tax-exempt land in Gwadar on Wednesday that Beijing will develop under a 43-year lease. The rest of the land will be handed over under the agreement with the public China Overseas Port Holding Company “soon,” senior Pakistani government officials told AFP.