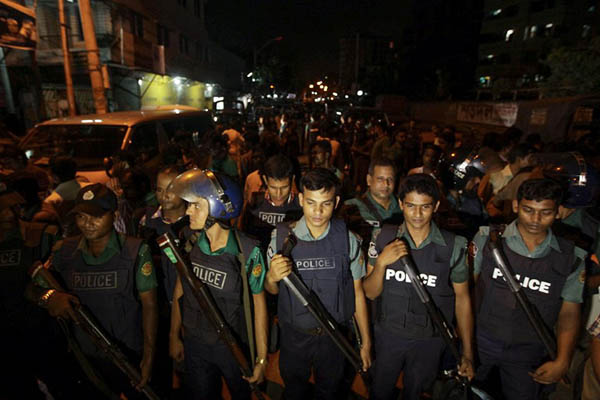 Bangladesh police raided a militant hideout in Dhaka on Friday, killing a suspected top Islamist extremist who helped plan the deadly attack on a café that left 22 people dead in July.

Police said the slain extremist was Major Murad, 35, who stabbed and injured three officers during the raid on a five-storey building in Dhaka’s Rupnagar neighborhood where the suspect had rented a flat.

“He was a senior member of the JMB [Jamayetul Mujahideen Bangladesh] and trained the five gunmen who attacked the Gulshan café,” said Sanwar Hossain, a senior counter-terrorism officer in the Dhaka police force. “He was smart and fluent in English. He was the chief trainer of the JMB and one of the planners of the café attack. He was shot dead after he stabbed three of our officers who were trying to take him alive,” he said, adding that the three policemen had been hospitalized.

The raid came days after police killed three suspected Islamist extremists including the alleged mastermind of the café attack, JMB leader Tamim Chowdhury, a Canadian citizen. Police have blamed the JMB for a wave of murders targeting foreigners and members of religious minorities in which at least 80 people have been killed.

Since the café attack in July police have shot dead at least 27 Islamist extremists.

The Islamic State group claimed responsibility for the Gulshan attack, releasing photos from inside the café during the siege and of the five men who carried out the deadly assault and were shot dead at its finale. But Bangladeshi authorities have rejected the claim, saying international jihadist networks have no presence in the world’s third-largest Muslim-majority nation.

Critics say Prime Minister Sheikh Hasina’s administration is in denial about the nature of the threat posed by Islamist extremists and accuse her of trying to exploit the attacks to demonize her domestic opponents.

Earlier this week U.S. Secretary of State John Kerry said during a visit to Dhaka that there was evidence to link the extremists behind the recent spate of deadly attacks in Bangladesh to I.S.