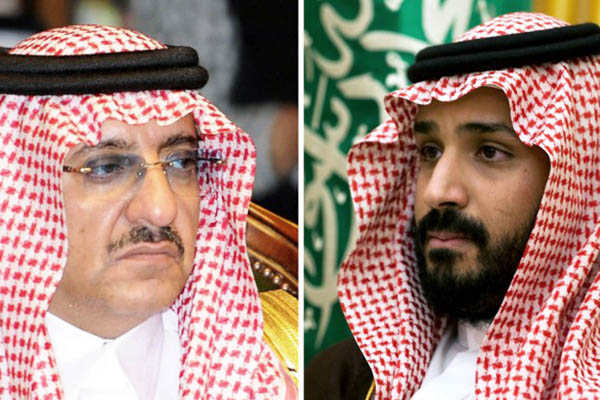 A power struggle is emerging between Saudi Arabia’s two most powerful princes, analysts and diplomats say, as the secretive kingdom confronts some of its biggest challenges in years.

The Saudi-led military intervention in Yemen, falling oil prices and rising jihadist violence are putting the country’s leadership to the test, nine months after King Salman assumed the throne following the death of king Abdullah.

The kingdom’s rulers have also faced criticism for last month’s haj tragedy, which, according to foreign officials, killed more than 2,200 people in a stampede at the annual Muslim pilgrimage. With concerns over the long-term health of 79-year-old Salman, jockeying for influence has intensified, experts say.

“It’s resulting in some disturbing policies abroad and internally,” says Frederic Wehrey of the Middle East Program at the Carnegie Endowment for International Peace in Washington. He points to the “irresponsible” Saudi-led intervention in Yemen and says the key Western ally has taken a more “hardline tilt” away from reforms.

Tensions between the two princes emerged after the king’s shock removal six months ago of Crown Prince Moqren, who had been appointed as the country’s first deputy crown prince by Abdullah.

In the months since, the younger Mohammed bin Salman has moved to shore up his power, analysts say. “A lot of people see this as a kind of a coup… that it’s one faction taking power for itself,” says Stephane Lacroix, a specialist in Saudi Arabia at Sciences Po university in Paris.

Moqren’s case shows that “this position of deputy crown prince is a bit precarious,” and helps explain why Mohammed bin Salman has been reinforcing his position, a Western diplomat says. In addition to being defense minister, Mohammed bin Salman heads the kingdom’s main economic coordinating council as well as a body overseeing Saudi Aramco, the state oil company in the world’s biggest petroleum exporter.

“Mohammed bin Salman is clearly amassing extraordinary power and influence very quickly. This is bound to unsettle his rivals,” Wehrey says. The deputy crown prince “has this need to structure his position to become, at the moment his father dies, irreplaceable” because he has no assurances of how Mohammed bin Nayef, as king, would treat him, another foreign diplomat says.

Mohammed bin Salman, who has a close relationship with his father, has been “acting as if he was the heir apparent, so this obviously creates tensions,” Lacroix says.

Diplomats view Salman’s removal in September of Saad al-Jabri—a minister of state and cabinet member associated with Mohammed bin Nayef—as one sign of the struggle. But there has not been a broader move against the interior minister, who is widely respected abroad for having led Saudi efforts against Al Qaeda and other jihadists.

“I think they’d be shooting themselves in the foot if they cut Mohammed bin Nayef out,” the Western diplomat says. “He’s well-respected. He’s the one guy in the West who is trusted, particularly on counter-terrorism.”

The crown prince has the loyalty of interior ministry forces, and most members of the royal family would support his ultimate rise to the throne as “something normal,” the other diplomat says. If a powerful faction were ready to move against the crown prince, whose police were responsible for security at the haj, the stampede would have provided an opportunity, he says. “They could have made him the scapegoat if they wanted to get rid of him.”

On the other side of the rivalry, diplomats say some in the royal family are quietly uneasy about Mohammed bin Salman’s handling of the war in Yemen, where Saudi Arabia is leading a coalition supporting the government against Iran-backed Shia Houthi rebels.

“You could argue this whole Yemen operation was in part calculated to shore up the defense minister’s profile,” Wehrey says.

The war, the cost of which has not been revealed, comes with the kingdom cutting government spending, tapping into its financial reserves and issuing debt to deal with a record budget deficit after oil prices dropped by more than half since early last year. “For the moment it’s still manageable,” Lacroix says, but some in the royal family are reportedly warning that the economic situation could become a worry in the long-term.

For now, analysts and diplomats say, the rivalry appears contained and there is little chance that the House of Saud will implode. “People have been writing off the al-Saud for a long time for various reasons,” the Western diplomat says. “They’re still here… still an island of stability in the Middle East.”