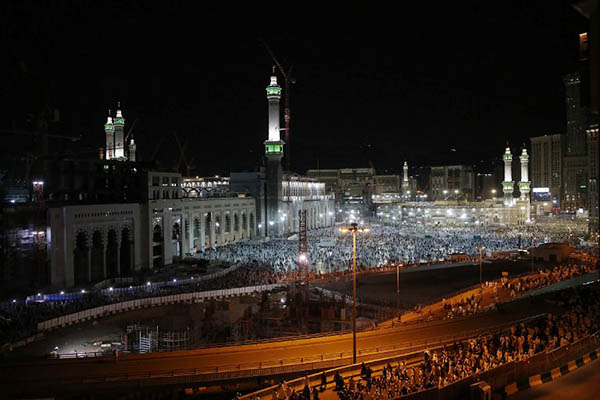 A top Saudi cleric on Friday described as “blessed” an Islamic summit in the capital Riyadh at the weekend to be attended by Muslim leaders and U.S. President Donald Trump.

In his Friday sermon, the imam of the holy city of Mecca, Sheikh Saleh bin Hamid, praised the “blessed meeting that will bring together brothers and friends” on Sunday. He urged participants “to show realism… and to stress the negative impact of interferences in regional affairs,” state news agency SPA reported him as saying.

He appeared to be referring to the mainly Sunni kingdom’s regional rival, Shia-dominated Iran. The two countries have taken opposing sides in wars in Syria and Yemen.

The imam said interference in the Middle East has “exacerbated confessional, religious, nationalist and ethnic conflicts,” and called on summit participants to act to “stem armed chaos provoked by terrorists and their sponsors.”

Trump, who will make Saudi Arabia the first overseas stop of his presidency on Saturday, is expected to give a speech about Islam to 50 leaders of Muslim countries at the summit.

In his sermon, the imam urged those attending the summit to work towards “constructive dialogue, cooperation and tolerance.”

“The world must know the nation of Islam is proud of its religion, its identity, its values and its culture,” but also “believes in human and cultural diversity,” he said. “Relations between states and nations must be based on equality and mutual respect.”

The ultra-conservative kingdom, the cradle of the austere Sunni doctrine of Wahhabism, last year launched an ambitious program of social and economic reforms dubbed Vision 2030.