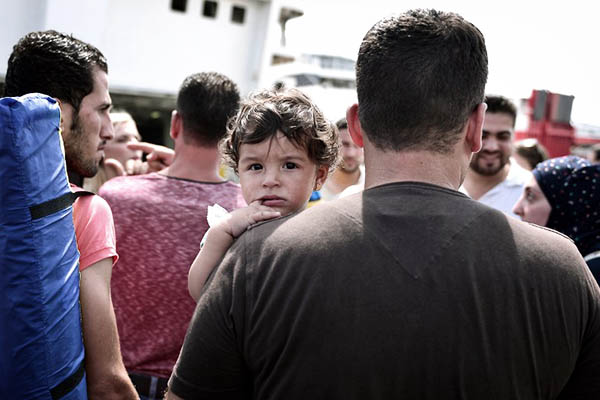 Migration chief says geographical proximity should not factor into which country takes in refugees from war-torn states.

The United Nations’ top official in charge of migration said Tuesday the crisis rocking Europe needs a “global response,” insisting that countries worldwide must be asked to do their share.

“We should have a European response as part of a global response,” U.N. Special Representative for Migration and Development Peter Sutherland told reporters in Geneva, hinting at the need for an international conference “where every country is held up to the spotlight.”

Europe is dealing with hundreds of thousands of migrants and refugees—many of them fleeing violence in places like Syria—pouring across the Mediterranean and taking a land route up through the continent. Syria’s neighbors are meanwhile struggling to host more than four million refugees from the war-ravaged country.

Sutherland insisted geographical proximity to a crisis should not determine who takes in refugees, pointing out that during the Vietnam War, refugees were welcomed into countries around the globe. The same, he said, was true following the Hungarian revolution in 1956, when an international conference was held to help distribute the some 200,000 people who fled the Soviet crackdown.

He called for “a much more proactive response by the international community.”

“We have to find a method, perhaps as we did in 1956 in the conference that took place then, to get specific commitments from every state in regard to taking refugees,” he added. He also insisted on a system to evaluate who constitutes a refugee that is consistent across all nations, noting that at present, different countries are using different criteria.

Sutherland also stressed that sending aid money to help Syrians at home or in the region should not be seen by governments as a substitute to taking in a fair share of refugees. “Buying your way out of this is not satisfactory,” he said, pointing out that a number of the wealthy Gulf states had been very generous in their contributions, but had taken in very few refugees. The same, he said, is true of the United States and Britain.

Sutherland called for a much fairer distribution of the refugee burden within Europe, pointing out that only five European countries have taken 72 percent of all refugees, while others take “virtually none.” He was especially critical of Hungary, which instead of welcoming refugees is building an anti-migrant fence along its southern border.

“History will judge this as a defining moment for Europe, a Europe that proclaimed itself to be created on the principle of values,” he said.

Sutherland also stressed that far more resources needed to be channeled into the U.N. agencies and other organizations trying handle the refugee crisis and the humanitarian impact of Syria’s war.

The U.N. refugee agency warned Tuesday that increasingly brutal fighting in Syria and the dire underfunding of aid operations aimed to help the refugees in neighboring countries are pushing many to risk the perilous journey to Europe.

“For the vast majority, who are not living in formal camps, hope is dwindling as they sink ever deeper into abject poverty,” UNHCR spokeswoman Melissa Fleming said.

The U.N.’s World Food Program (WFP) meanwhile said severe underfunding had forced it to halve its food assistance to 1.3 million Syrian refugees, most of whom are now living on the equivalent of 50 U.S. cents per day. It has cut out food assistance altogether to 229,000 refugees in Jordan and 131,000 in Lebanon, as it tries to focus on feeding the most vulnerable.