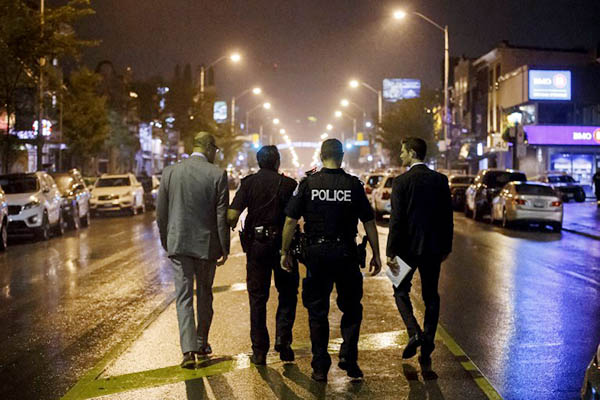 Faisal Hussain had struggled with psychosis and depression his entire life, according to his family

The 29-year-old man who opened fire on restaurant goers and pedestrians on a Toronto street overnight, killing two people and wounding 13, had “severe” mental health issues, his family said on Monday.

Police identified the gunman as Faisal Hussain of Toronto. He was found dead near the scene of the shooting after an exchange of gunfire with police.

Toronto Police Chief Mark Saunders said an 18-year-old woman and a 10-year-old girl were killed in the shooting rampage and 13 people—aged 10 to 59—wounded, some seriously.

The authorities have not yet determined a motive for the attack that took place in Toronto’s bustling Greektown neighborhood around 10:00 p.m. on Sunday.

Hussain’s family, in a statement to CBC News, denounced his “horrific actions” and said he was suffering from mental problems. “Our son had severe mental health challenges, struggling with psychosis and depression his entire life,” the family statement said. “The interventions of professionals were unsuccessful,” it said. “Medications and therapy were unable to treat him. While we did our best to seek help for him throughout his life of struggle and pain, we could never imagine that this would be his devastating and destructive end,” the family said.

Video footage posted by Canadian media showed Hussain, clad all in black, walking on a sidewalk and suddenly pulling out a handgun and shooting into a restaurant.

Just hours after the shooting rampage in Toronto, police arrested a man who tried to stab a member of the ceremonial guard outside parliament in Ottawa. The man was quickly arrested and no one was injured in the incident, the Canadian defense ministry said.

There was no immediate explanation for the knife attack and police were also seeking a motive for Hussain’s overnight shooting spree in Toronto. “At this stage of the investigation, we do not know why this has happened yet,” said Saunders, the police chief. “It’s way too early to rule out anything,” he said. “Absolutely everything is open right now.”

Witnesses said the shooting rampage lasted just a few minutes and sparked panic in the popular neighborhood of bars and restaurants. “It was a very rapid and fluid incident that unfolded very quickly,” said Detective Sergeant Terry Browne.

Andrew Mantzios told The Globe and Mail newspaper that he was having coffee with friends when shots rang out around 10:00 p.m. Mantzios said he saw a man with a “horrible expression on his face” shooting at a crowd of people waiting to cross the street. “And then a lady tried to run and she fell down,” he said. “He turned around and shot her point blank, two or three times. Believe me, I’ve never seen anything like that,” he said. “I am still in shock.”

“Our entire city has been shocked by this cowardly act of violence,” Toronto Mayor John Tory said. “Gun violence in any part of our city is horrible and completely unacceptable. I promise all of the people of Toronto, but most importantly those directly affected by this tragedy, that we will all be relentless in getting answers about why this senseless attack happened,” Tory said.

Witnesses reported hearing at least 20 shots during the rampage on Danforth Avenue, Greektown’s main drag. “There must’ve been 20, 30 shots, altogether. It was a lot. We just ran,” John Tulloch, a resident who was out for a walk at the time, told The Globe and Mail.

Jody Steinhauer told CBC she was at a restaurant with her family when she heard what sounded like 10 to 15 blasts of firecrackers. She said she was told to run to the back of the restaurant. “We started to hear people scream out front,” Steinhauer told the broadcaster.

Ontario’s new Premier Doug Ford called it a “horrific act of gun violence” and said his heart went out to the victims.

The shooting rampage comes amid concern over a surge of shootings in Canada’s largest metropolis. Canada traditionally has relatively low levels of gun violence, particularly compared with the neighboring United States.

Tory, the mayor, called the shooting “evidence of a gun problem” in Toronto. “That leads to another discussion, ‘Why does anyone in this city need to have guns at all?’” he said.

According to police figures, as of July 14 there were 220 shootings in Toronto this year with 27 fatalities. There were 196 shootings with 17 deaths in 2017.

Last week, Toronto police began implementing a “gun violence reduction plan.” That includes having 200 extra officers on shifts in specific neighborhoods between the hours of 7:00 p.m. and 3:00 a.m.—when most shootings occur.

The Greektown shooting comes three months after the city was shaken by the deaths of 10 people killed by a man with an apparent grudge against women who drove into pedestrians on a street in Toronto’s north end.